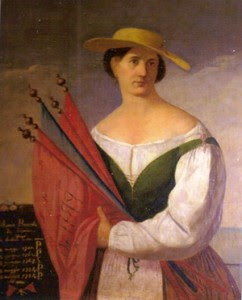 Roll on the translation, for all the English-speaking women who love their small boats.And for all of us interested in the parts gendered transport and mobility play in working lives.
Posted by Dr Jo Stanley, FRHistS. at 03:24

Thanks for this post! I'm trying to find more info about Maria. Do you have any suggestions? Unfortunately, my Italian is pretty conversational only, so I don't think I'll make it through Monico's book.