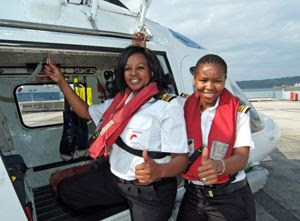 'Pinky Zungu remembers:“Being at sea was difficult at first. I was the only cadet and the only female on a Russian cruise ship where only the captain spoke English well.”
Posted by Dr Jo Stanley, FRHistS. at 14:43

am so proud of you am also a lady training to become a marine pilot in , the port of Mombasa,Kenya am so happy for you all because you are all a true inspiration and you make me feel normal because i know how people can think its a weird career for women.