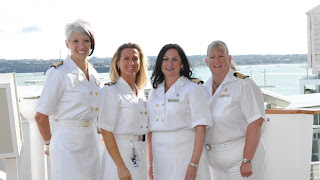 "Women ruling the water! says the silly headline in Travel Bite today. Oh yeah, sure. Just as if!

This all because one of the rare women cruise ship captains, Sarah Breton, is setting off on her 32-day cruise around the South Pacific with three senior officers who happen to be female.
See http://travel.msn.co.nz/travelnews/8266194/women-ruling-the-water.

The article quotes Pacific Pearl’s hotel director Jane Herron as luaghing “We are women in a woman’s world.”

Excuse me? Several swallows do NOT make a summer. Thousands of women are seeking not only maritime work, but respect when they do it, and equal opportunities in their career paths.

I agree somewhat with the post by Sarah from Melbourne, on 28/06/2011 1:18:41 who wrote:'So what does Gender have to do with it? I thought that gender equality was supposed to be promoted? What a joke. Can you imagine an article talking about an "all men" boat crew in a positive manner? It would be EVIL SEXISM AND MALE OPPRESSION.

'So why are things like "womens olympics" and "all womens ship crews" talked up as something amazing? The double standards with this "equality" is mind blowing. Just like "equality" with races.... this [is]reverse sexism.'
Posted by Dr Jo Stanley, FRHistS. at 23:53