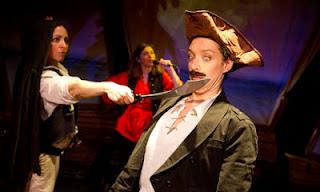 This new play about women pirates (The Pirate Project, Oval House, London, May 20 - June 2 2012) is an expression of the way some (I'm sorry to say, rather naive) feminists like to think of women pirates: as swashbuckling heroines rather than as lower members of a hierarchical maritime workforce.

Some lines from Brecht's Galileo seem appropriate. 'Pity the land that hath no heroes' a pupil says to the great physicist. Galileo replies 'Pity the Land that hath need of them.'

When I wrote Bold in her Breeches: Women Pirates across the Ages a lot of film and stage companies got in touch with me about making productions based on such sassy interpretations. And I spent a lot of time trying to inject realism: 'I don't think piracy was that glamorous, really. Try thinking about them as a gang of minicab drivers or squaddies. They're not Tina Turners and Madonnas in dominatrice gear.' Yes, I enjoy strapping on my shoulder parrot and strutting with my cutlass at fancy dress parties. But it's not real.

And then, well over a decade later, real-life Somali pirates stepped in and disabused everyone, finally. Pirates were revealed in all their seedy thuggery: just macho crims side-stepping poverty, brutally, and much less privileged than all the high-level bankers engaging in heists with pin-striped chutzpah.

Two reviews of The Pirate Project sum up the problem of perceptions of historic women pirates. Sally Stott, in the Stage (21 May) wrote 'Like an assertiveness training session for women, the first show of Oval House’s OUTLAWS season suggests getting in touch with your inner pirate in order to find out who you really are, (sisters). However, despite plenty of self-conscious roaring and lines like “stop oppressing me with your patriarchal bullshit”, the realities of pirating and feminism are contradictory bedfellows. When being a pirate is essentially about violence and theft, how can it also be a part of aspirational modern womanhood?'

Quite. But also there's no evidence that women challenged these essentially patriarchal institutions, albeit outside the law and more communal than naval and merchant vessels. And although a few iconic stories suggest two or three pirate women spoke and acted boldly, I have to say that I suspect that most non-cross-dressed women on pirate vessels were more likely to have been gang-banged and systemically relegated to reheating the turtle stew (again).

Director Lucy Foster created a devised production (an Improbable Associate Artist Project). Stott writes that the play light-heartedly reworks (is that code for 'inauthentic' or 'fancifully trashes'?)real-life 17th and 18th-century pirates Annie Bonny, Mary Read and Ching Yih Shih.'By the final scene the cross-dressing heroines are denouncing killing and setting up an on-board creche... Performers... add their own life experiences to the mix, but the “it’s OK to be yourself” message is familiar and risks sounding condescending, despite good intentions.
... the play’s conclusion feels disappointingly traditional - a celebration of women who excel at multitasking, caring and being honest. It could be braver.'

Lyn Gardner, in the Guardian (20 May) asks 'Will learning to say "Haargh" very loudly like a pirate further the cause of feminism? The creators of this playful oddity clearly think it's a step in the right direction as they weigh anchor and invite us on "a journey of empowerment over an ocean of self-discovery to find the treasure buried within us".

'It's like a 1970s consciousness-raising meeting with added swashbuckling....In these stories of women who stepped outside the rules of conventional society, there's scope to explore why so many of us want to be good girls, conforming to ideas of how a woman must look and act. But that's never examined in any depth in this piece, which is intellectually and theatrically at half-mast. "A pirate doesn't ask permission, she just takes what she needs," we're told. Yes, so do many modern-day pirates, including Somali raiders and hedge-fund managers, but that doesn't make them good role models.

At the end there's back-tracking and a suggestion that we should all be touchy-feely sharing pirates. But the show isn't well thought-through and tries to disguise its lack of rigour with a messy DIY aesthetic. There are some filmed snippets (sometimes hard to hear) of older women talking about their lives and motherhood, and some acted-out scenes from 17th- and 18th-century women pirates' lives – even these have an oddly romantic gloss. A sadly wasted voyage.'