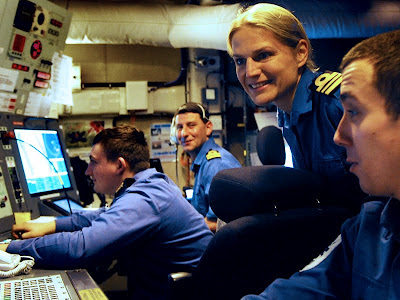 Commander Sarah West (40) on May 27 became the first woman to command a major warship in the British Royal Navy. She joined the Type 23 frigate HMS Portland in Rosyth. It's only taken 450 years.

Looking at the media coverage is interesting. Everyone is for it, apart from the odd misogynist tweeter. Everyone says that of course she must be a highly competent person, gender aside, because you don't rise to such heights otherwise. The Navy can't afford to let just any new driver loose on its pricey real estate. An estimated 93 per cent of men don't reach command level.

'Commander West said:"Taking command of HMS Portland is definitely the highlight of my 16 years in the RN so far. It is a challenge that I am fully trained for and ready to undertake."'

'Commander West, who lives in Middlesex, joined the RN in 1995.Born and educated in Lincolnshire, she graduated from the University of Hertfordshire with an honours degree in mathematics. Trained as a warfare officer, she has had a number of sea appointments, which included a deployment to the Gulf... She commanded HMS Ramsey, HMS Penzance, HMS Pembroke and most recently HMS Shoreham as part of the 1st Mine Countermeasures Squadron.'

So when/how did it become alright to have women in such top roles?

And what has it taken? 40 years of battling for equal rights to reach this point. Many career failures and many life-wrecking anti-discrimination cases preceded this victory. Sarah West's promotion could not have occurred without hundreds of courageous women and men battling for decades for change within the Navy, WRNS and maybe the MoD. So let's raise a glass to them.

To celebrate the progress the MoD published a list of milestones that tell the story. See http://www.mod.uk/DefenceInternet/DefenceNews/PeopleInDefence/MilestonesReachedForWomenInTheRoyalNavy.htm.

It omits the role of some very clever quietly feminist campaigners, of obstructions and of statistics, which can put matters in perspective. So in the interests of justice this is an slightly amended version.

My changes are in bold. And my statistical calculations are open to challenge, but based on the best that can be from data on the internet research. I'll be doing fuller calculations with MoD stats later.

1917: The Women’s Royal Naval Service is launched following heavy naval losses in the first world war and a manperson power shortage and pressure by high-powered feminists. It's headed by a suffragist with naval family, Katharine Furse. But women are not allowed to do seagoing work. Wrens number 7,000 at peak, one per cent of naval forces (407,316. Britain's is the largest navy in the world with 700 ships.

1939: WRNS are re-formed with the onset of the second world war numbering 74,000 women doing 200 different jobs. But less than 100 are allowed to work deep sea, despite their willingness to do so. Many use the opportunity to work on small boats, sail out to moored ships as boarding officers, and to travel overseas. Vera Laughton Mathews, the director is a former journalist for suffrage journals and also from a naval family. The navy has at least 700 ships. There are 923,000 men in the Royal Navy in WW2, at peak, so the WRNS are one twelfth the size.

1946: WRNS are reduced to 3,000, just 4 per cent of their wartime total. This compares to male staffing levels being cut to 20 per cent of the former total (By 1947 there were 195,000 men in the Navy as opposed to 923,000 at peak). Britain's is now the second largest navy in the world, after the US, with 800 commissioned ships that year. Again the Association of Wrens keeps up the solidarity and pride.

1974: An impartial survey takes place, which finds women should be integrated in the Royal Navy.

1976 WRNS officers' training is integrated with naval men's training, at Britannia Royal Naval College, Dartmouth. This means that men start being able to see for themselves that women can be competent and are human beings, not an inferior but charming sub-species.

1990: Because of a lack of sufficiently competent male applicants, navy formally allows women to go to sea with men. In fact they'd been wangling ways to do so for years.

2009: Medic Kate Nesbitt is the first woman in the Royal Navy to be awarded the military cross after braving Taliban fire to tend a fallen comrade in Afghanistan.WW2 Wrens had earlier won awards for bravery.

2011: Navy says women will join men aboard submarines from 2013, many years after other navies had accepted them. The excuses that there was not enough space for separate toilets, and that nuclear subs might affect unborn children seems to have dropped away.

2012: The first female commander of a major Royal Navy warship Cdr Sarah West takes charge of HMS Portland. The MoD says it expects three more vessels will be commanded by women by the end of this year, meaning 5 per cent of its 79 commissioned ships. The number of women has dropped from 4,535 in 1990 to 3,400 today. They are 10 per cent of the total 34,4000 people in the Royal Navy. Some roles are still closed to women. In terms of personnel, the UK is no longer in the top ten of the world's navies. In terms of tonnage it's fourth after the US, China, and Russia. The US has 369,000 personnel and 430+ ships.