Queer voyages to the Falklands/Malvinas war 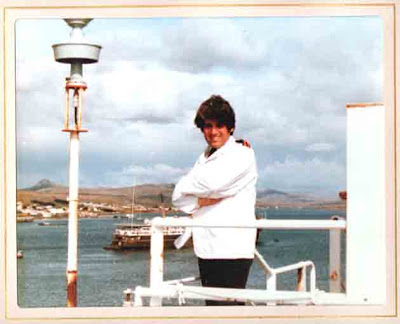 Today I've just written a piece for Pink News (http://www.pinknews.co.uk) about gay merchant seafarers' voyages to and from Falklands/Malvinas war, thirty years ago this Spring.

Read the article for more on these topics:
Steward Roy 'Wendy' Gibson on the ferry Norland (see pic) kept up morale with his piano and became the most famous out gay man of the Falklands/Malvinas War, as well as an honorary Paratrooper.

GBT men have been omitted from Falklands/Malvinas War history because it’s inconvenient news for stereotype-lovers that gay men can be brave. But as Wendy said ‘I may be a Mary but I’m as hard as the next, we gays had to be.... We’re still men.’

Lots of sex with virile young soldiers is only the stereotype but....

These merchant seamen don’t think of themselves as Falklands/Malvinas War heroes. ‘No, I was just ironing the captain’s shirts’ joked Norland steward Frankie.

Their unsung contributions not only include treating Argentinean prisoners like human beings and keeping mum about being gay-bashed and insulted by sissyphobic troops.

In Frankie’s case when their ship was being bombed ‘I went into my Peggy Mitchell mode, screamed ... it was my way of coping… it gave men the chance to express their fears too. Maybe us gays were better off than some of the straight people, because when we was frightened we could say “I’m frightened”… we could let it out.’

Daily living changed homophobia. As Para Ken Lukowiak wrote in his memoirs ‘it is true to say that he [Wendy] now gets more of a mention than the likes of Colonel Jones, VC... And no longer is Wendy referred to as …an arse-bandit … “Gay boy” is about the worst you will hear and it’s always … said with affection. You see, we do live – and we can learn.’

As for the veteran seafarers, in ports throughout Britain they'll be celebrating the June 14 end of the war, some in gay-friendly dockside bars. They're just glad they're back in one piece, even if their nerves are still frayed. So what, they say, if the record is silent on their contribution: 'We know what we did.'

I myself just want them to be properly recognised.