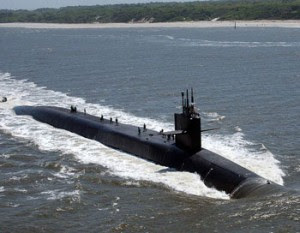 Today's breaking news from the US is that, following eight months of anti-gay bullying (hazing) and attempted rape of sailor on the USS Florida, a Georgia-based nuclear submarine, a US Naval officer was sacked.

Associated Press has a leaked investigative report. It reveals that the US Navy relieved Charles Berry as "chief of the boat” due to dereliction of duty, in March. The investigators found that Berry was not involved in the hazing, but had knowledge of it and failed to inform his chain of command.

The story is published today at http://www.lgbtqnation.com/2012/06/anti-gay-hazing-attempted-rape-of-sailor-leads-to-firing-of-top-navy-officer/

LGBTQ Nation explains that 'Aboard a submarine, the chief of the boat advises the commanding officer of issues involving enlisted sailors.

'The hazing was directed at a sailor who reported that another man pulled a knife and tried to rape him in the port at Diego Garcia.'

Diego Garcia is one of the joint UK-US military facilities, in the Chagos Islands, which are part of the British Indian Ocean Territory. We (the UK) evicted Chagossians in the early 1970s to allow the US establish this military base the largest island.

The victim can't be named, but 'According to the report, the victim was generally well-liked on the ship.'

This is the bit I find heart-breaking - not least because I know harassed women and black people who've tried the same strategy: Grit your teeth and wait it out, act pleasant. The submariner 'endured the anti-gay torment for months because he thought it would eventually stop'

It didn't because bullying becomes systemic and expressive of many complex and buried feelings. This collective aggression is a focus of many personal grievances and insecurities, including, perhaps, the crew's feelings about how they themselves are respected or not by the US Navy. It's got to be partly a product of how they are trained to hate 'the enemy' Other.

'Among other things, this submariner was called a derogatory term for a gay person and referred to as Brokeback, a reference to the gay-themed movie Brokeback Mountain. In addition, someone posted a drawing of a stick figure being sexually assaulted.

'Before a group training session on the repeal of the military’s "Don’t Ask, Don’t Tell” policy, the sailor was subjected to comments about coming out of the closet...

'Other sailors asked when they could meet his boyfriend. They asked whether his boyfriend was Filipino, the nationality of the person he said tried to rape him.

'After eight months of harassment in 2011, the sailor eventually wrote a note saying he had suicidal thoughts ... that he could snap and hurt himself or someone else.

'The report says there was a culture of hazing and sexual harassment aboard the submarine...There was inadequate knowledge about the Navy’s policies against it to stop the behavior before the sailor reached that point.'

Among the posts responding to this article are:
# one that hopes that this revelation will now mean women's complaints about being harassed will be taken more seriously
# John D Cox, a veteran who'd been bullied in the Vietnam era who says 'Please see link: http://www.af.mil/news/story.asp?id=123140293 for information regarding sexual assaults according to the Dept of Defense.
'A higher percentage of females in the military admit to sexual assaults than males. However, due to the much greater numbers of males in the US military when compared to females, many, many more males are sexually assaulted in the American military.
'It is mostly an invisible fact which most Americans don't want to know. And yet, supposedly, "We Support The Troops."
'I didn't report the ... harassment and...assault on me, nor the accompanying depression and my suicidal thinking because I knew ... the US Army would blame me for the incidents which occurred back during the Vietnam War Era...the 1st sergeant of my company not only knew of the sexual and physical assaults on my person, he also participated. It's taken years of intense psychotherapy... and I know that, regardless, I'll never be "cured." '
# Debbie Brady: 'As a Vietnam era Navy veteran, I am glad to see justice in this harassment case. As a transgendered woman I know the level of harassment that can occur on board a Navy ship.'

The point is not to make a scapegoat out of Berry. It's to ensure no-one bullies, and that at all officer ensure people, whatever their gender, sexual orientation or race, can get on with their job in relative peace.

That's especially important on a sea-going vessel, which is also a worker's accommodation. Submarines and ships are not places that victims can escape from at night and do some recuperating at home. This is home'.
Posted by Dr Jo Stanley, FRHistS. at 01:41