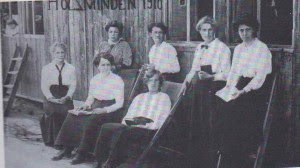 Today, in 1916, five British seawomen were captured by the enemy. Despite wartime dangers women crew were still sailing. These stewardesses were on the Great Eastern Railway ferry Brussels looking after Belgian refugees.

After leaving the Hook of Holland for Britain on a routine trip their ship was captured after Captain Fryatt was accused of sinking a U-boat.It was Friday 23 June 1916.

German crew who boarded the ship wondered at the women’s calmness. ‘Aren’t you afraid of being shot?’ they asked. After all, Edith Cavell had been executed by firing squad just seven months earlier. ‘“We are Englishwomen” was considered sufficient reply,’ claimed the women’s company magazine afterwards.

When the captured ship was taken to Zeebrugge then Bruges the women's blue uniforms with brass buttons caused a confusion about identity. Germans took them for fighting women: England’s last hope.

Their male shipmates were sent to Ruhleben, a civilian detention camp near Berlin, As females, the stewardesses were interned at the Holzminden camp, near Hanover.

Hungry and miserable, they must also have been worried. Internment meant the women lost earnings. Many seawomen were family breadwinners so their dependents were at risk.

No shipping company paid crew who were not working. Wages stopped the day after shipwreck. For the Brussels women this meant six months without an income.

They were only released in October. One of them, Edith Smith, went straight back to marry her fiancée by special licence, just before his unit left for Egypt.[3]

During their incarceration a high-profile publicity campaign was waged. Diplomatic initiatives attempted to free the women. Indeed, they got more publicity than any other seawomen in that entire war. Media headlines spun the story into another shocking tale of Hunnish brutality.

Surprisingly no newspaper ever suggested the women should not have been working at sea.

This is just one of the surprising stories of courageous women at sea to be found in my new book, Risk! Women on the Wartime Seas, which will be published next year by Yale University Press