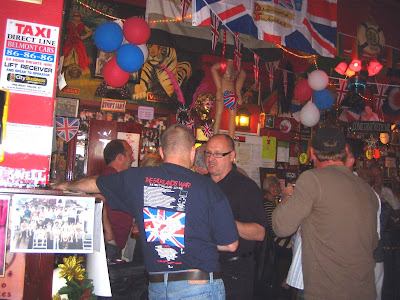 Friday June 15 2012. It was raining, on Hull’s furiously busy Hessle Road. It was teaming down like a wintry day in the Falklands. And Frankie’s Vauxhall Tavern was crowded and jolly with the previous week’s jubilee bunting. You could almost fail to spot the inflatable phalluses, scarlet furry willies, and cutely grinning silicone mega-dicks under all the Union Jacks still festooning its raunchy walls.

But this was a special day with serious intent – to commemorate the 30th anniversary of the Falkland’s conflict and in particular the role of the Norland, the former Hull-Rotterdam ferry that took part in it. Indeed some of the photos of drag queens and favoured divas and - surely not – Her Maj were temporarily covered over with photocopied snaps and battered newspaper cuttings about the Norland’s extraordinary voyages to the South Atlantic in late Spring 1982. 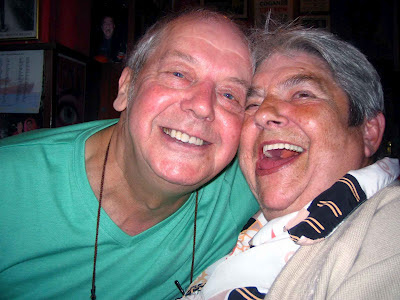 It was to start at 12 midday. The prelude was quiet and the former crew kept to their own little group. Now mainly retired, their long tousled hair and droopy moustaches were long gone and replaced by blue blazers. The biggest absence was the beloved captain, Don Ellerby, who has passed away.

Everyone was waiting for Wendy. Wendy the most famous gay men in the Falklands War. Roy ‘Wendy’ Gibson for whom they’d hired the joanna. (It wasn’t his favourite piano shade, pink, but heigh-ho, it had resilient keys and an impressive loud pedal.) Wendy, who would, in his glitzy waistcoat, do his Liberace numbers as always and bring morale up higher than Dusty’ Springfield’s beehive hairdo.

When he arrived at two, frazzled from a morning’s tedious domestic tasks but in a suit so immaculate he could have been a Premier league football manager, he greeted everyone. At last, it could start, properly.

His old shipmates thought the rest of us nutters for being avid for the Gibson touch on the waiting keys. No man is a hero to his valet and no queen is a hero to his/her shipmates. They’d become over-sanguine about his abilities to entertain. But the Paras, it seemed, wanted that old sound that had accompanied them to war.

And oh boy could he belt it out. Wendy played con brio and in brief sessions. The crowd noise grew louder as men downed their ale, and the rain outside grew more torrential. People passed round albums gone sticky with age and started to tell stories about their connection with the Norland. At the tops of their voices, standing, happy, buffeting by others weaving their way through the melee selling raffle tickets for the South Atlantic fund, they told each other their chunk of the story.

Happy to connect. Happy to remember. Happy to be almost-back-there, revelling in the preferred version without the deaths, the Argies, the privation, the mixed feelings about the war’s rightness and the unvoiceable doubts about Mrs T’s gung-ho defence of these ‘somewhere-off-Scotland-surely?’ islands.

Each time Wendy stopped playing (yes, roll-out-the-barrel-you-are-my-sunshine-my-old-man-said- follow-the-blue birds-over) some brawny young man would come up to him, often in a Para t-shirt, with an album extended and say ‘My dad sailed with you. He’s always talking about you. Still. You made his war.’ And Wendy would get excited and honoured and think he remembered. It was his day. But not only his. 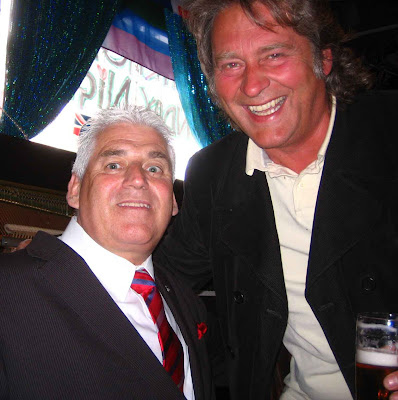 I’d planned to film it for posterity. At the last minute the crew weren’t able to come but I still felt obliged to get to know what I could. I sidled round the pub wondering who I could ask about what, and would that be alright.

What was impressive for me, an outsider, was the irrelevance of my question, ‘But how come you could accept all the pouffery?’ I asked the military guys ‘How is it, given the armed forces’ homophobia then, that you could tolerate someone camping it up on your way to war?’. They said I’d got it wrong. They weren’t anti-gay. They were just against furtive closeted types who wouldn’t stand up like men and brandish their happiness at being more Martha than Arthur.

I asked the members of his former crew how they copied with the queens on board - as queens were on most late twentieth century ships, war or not, creating gay mini-heavens. They too said I’d got it wrong. On ship everyone accepts everyone else. ‘See, you’ve got to get on, in that enclosed space. You’ve got to accept people whatever they are. And you do.’

So … It was bonhomerie all round. And yet I knew that armed forces guys had gay-bashed one camp ship’s steward. And I knew, because I’d lived through the 1980s, that homophobia ashore could be vicious and that therefore no ship could be entirely exempt from that. From my interviews with other gay seafarers I knew that camp man had deliberately toned themselves down so as not to antagonise their military passengers. A ship is never an entirely heterotopic space. It’s never that Other, especially when it’s a vessel that’s home several times a week , unlike the deep-sea gypsies touring the globe for weeks and months.

When at 5 I left the party was in full swing. In fact the swing was getting fuller and louder. The Norland crew seemed to be pretty much still gathered in their own small groups and not mixing with the other revellers. But certainly they were doing plenty of their own collective revelling.

Wendy was the one who wove in between, linking them all. And certainly his nieces were happy to look at the albums shown them by a proud Para’s son. Certainly there was no ostensible secrecy about his or Frank’s sexual orientation. Not a hair was turned about the exuberantly cheeky décor in this knees-up. The hundred-strong crowd were as glorying in their way as revellers at VE day celebrations in Trafalgar Square’s fountain.

It was a party, and a re-remembering. And of course the spectacles we like to wear are the rosiest ones possible. And for once it’s a shade of pink that every man was wearing happily in that changed ex-maritime heart of the entire east coast. It was the good old days, again, for at least a day, and not unlike the party they'd just had for that other queen, Elizabeth R. 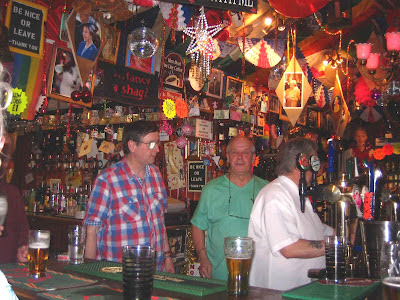 Frankie and colleagues behind the bar in the Vauxhall Tavern, Hull.