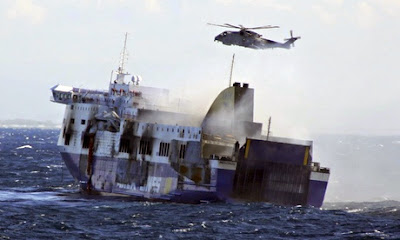 36 hours ago, on Sunday 28 December 2014, the Greek ferry Norman Atlantic caught fire in the Adriatic Sea. Off Corfu 422 passengers and 56 crew tried to abandon ship in terrible weather; at least ten have already died.
This morning the British headlines are, astonishingly, focusing on the old chestnut of gendered evacuation.
Some passengers are reported as ignoring the old 'women and children first' protocol, also known as the Birkenhead Drill.
The Guardian reported that Christos Perlis, a 32-year-old Greek lorry driver, said he and another man tried to impose order. “First children, then women and then men...But the men, they started hitting us so they could get on first.” 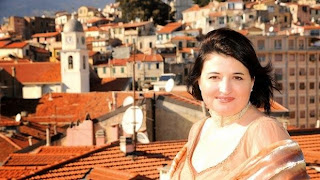 Dimitra Theodossiou (pictured,) a Greek opera soprano heading to Rimini to sing in Nabucco said 'some of the men had been put below to give precedence to women and children. “But they climbed up and punched and tugged and pulled you out of the way, elbowing their way to safety. It was very ugly. I shall never forget it.”
http://www.theguardian.com/world/2014/dec/29/ferry-fire-rescue-death-toll-missing

THE REAL POINT
To focus on gender misses two main points:
1.NEED
People should be given priority according to need, not gender. For example a disabled elderly man deserves more help than a young woman bodybuilder.
Women, including suffragettes, have now been arguing this for a century.
The human tragedy is that in a crisis some human beings, of both genders, forget to be kind.
And the practical problem is that selective evacuation can cause more loss of life because it wastes precious time.
2. SAFETY
The central issue is that the ship was unseaworthy and the crew weren't trained. It's the shipowner's culpability, and the fact that operators can evade international safety laws, that merits attention.
An inspection on December 19 reported that there were "safety deficiencies” including missing emergency system parts and faulty fire doors.
Seemingly only three liferafts were available. The alarm was given too late and crew weren't giving passengers directions.

BETTER IDEA...
How about replacing that 'women and children first' slogan with 'to each according to their needs'. Better still: 'Make ships safe.'