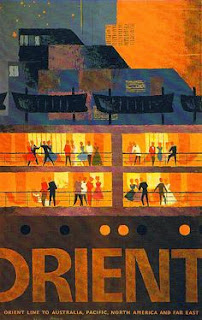 For the crew and officers on British ships in the 1950s Xmas celebrations were enriched through the actions of the women working on board.
By the 1950s such women included stewardesses (the majority), women assistant pursers (many of whom were ex-Wrens in those days) telephonists, children’s hostess, hairdressers and the nursing sister.

There might be say five stewardesses and one-to-three women in each of the other roles. Women would have amounted to about fifteen in all, depending on the ship.
They were always less than 5 per cent of total complement at that time.
Purser Nelson French wrote about this Christmas at sea on Orient Line ships to Australia via Suez (‘The Purser’s Tale of Christmas at Sea’, Sea Breezes, vol 61, no 504, December 1987, pp 843-848.)
I’ve extracted the sections that suggest what’s going on, gender-wise 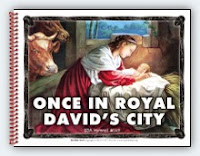 HARMONISING VOICES
He wrote that in 1953 on the Orcades women officers persuaded the captain to have a nine-lesson carol service. Apparently it worked so well that ‘This became tradition throughout the Orient Line.’
On the Orion women enriched carol singing both visually and aurally. The ship’ 40-strong choir processed around the ship, led by ‘a nursing sister with her cape reversed to show the red lining on the outside, and carrying a candle.’ When it came to singing, the women led off singing the first verse of Once in Royal David’s City, then the whole choir joined in the next verses and other carols.

SERVING XMAS FARE
Like grand houses and the armed forces, passenger ships had the carnivalesque tradition of the upper order serving food to the lower order on Christmas Day (a bit like Midsummer Eve where everything is topsy-turvy and where revelry can be shockingly frisky, as Bakhtin points out)
Referring to the Orontes, Nelson French pointed out – though not in so many words - what a difference the gender of the server made, especially if she was serving young men who didn’t normally have contact with women on ship (as lower deck and engine room males didn’t):
‘while some ratings may have thought the deputy purser a little patronising serving slices of turkey, when it came to a pretty woman assistant purser offering stuffing it was a different matter.’ 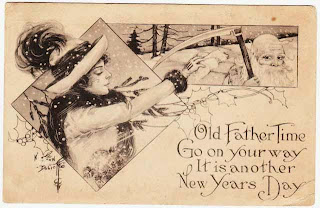 SEEING OUT THE OLD YEAR
On New Year’s Eve on the Orion (still in the 1950s, seemingly) ‘a pretty young girl in a bikini burst into the ballroom [as arranged] with a shriek of joy and headed for Old Father Time and chased him' and his scythe and his hour glass, away from festivities. 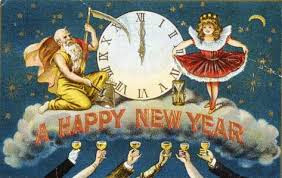 ALTERNATIVE FESTIVE PLEASURES
So these stories show us that women in these hegemonically Christian situations did at least three things socially, on top of their usual jobs. They:
~ influenced the format of the religious service (a gift given by hospitality staff to guests)
~ they were enjoyed as eye candy in a conventionally-gendered ways in an unconventional exchange where class, not gender, was the main point
~ their voices were an important dimension enriching the collective singing, contrasting to the mass of c30 male voices. They were a welcomed symbol of diversity accepted.

In other words, there was a lot going on that was not to do with the nativity but with cooped-up peoples’ appropriation of a festival that could give a wonderful marginal space for other kinds of pleasure.