Pregnancy and Mothering at sea in the nineteenth century

Today on cruiseships voyaging with your children can be a pleasure. On Mother's Day, as on any day, amusements, crèches, and babysitters abound. Usually no-one gets seasick. Falling overboard is rare. And women don’t give birth there because shipping lines don’t allow you to sail after 27 weeks.
Refugee mothers, of course, have a frightening time. Survival is the issue on their risky ships and on voyages that take days,not months. See http://www.reuters.com/investigates/special-report/europe-migrants-ship/.Picture by Reuter/Alkis Konstantinidis 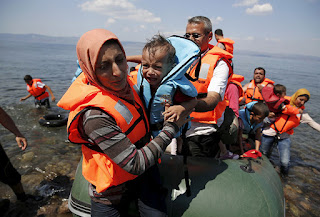 Mothering at sea in the nineteenth century
In the past mothering at sea meant not only keeping the kids amused (Ooh, look at that porpoise) and safe (Christine, do not climb on that rail, you’ll fall and drown).
It also meant risking being where illnesses such as measles and dysentery could spread, fatally for you and your offspring.
On top of that, the dehydration caused by seasickness led some nursing mothers to stop lactating. Their babies then were distressed and colicky, causing the mother more distress. One or both might die.
Did mums get any help? Yes, they did, in the nineteenth century depending on the circumstances. Busy stewardesses helped with childcare. Other passengers looked after the children and even gave their own milk to breast-fed babies
And wealthier women had their own servants to help them, especially if they thought they were going to give birth on the voyage. Details of this can be found in the 1826 voyage story of two of Australia’s founding families: that of pregnant sisters-in-law Harriet Parker King and Mary Copland Lethbridge (nee Parker King).

Mothers of Oz’s founding families, afloat
Harriet Parker King, nee Lethbridge (above pic), a thirty-year old Launceston-born woman (1796-1874,) was travelling to Australia in September 1826. She was emigrating to Dunhevid, in New South Wales, the farm of her distinguished husband’s family.
While Harriet and the children were sailing by merchant vessel ship her husband was leading an expedition to Patagonia on the HMS Adventure, accompanied by HMS Beagle. Phillip Parker King (1791-1856) was to become an increasingly famous Royal Naval hydrographer, and surveyor. Phillip was later celebrated on postage stamps.

Harriet had married 26-year-old Phillip in January 1817 when she was 21. By the time of her 1826 journey she had six sons. Four (Robert, Essington, Charles and Baby) sailed with her to Australia, when Harriet was five months pregnant with her seventh or eighth child. 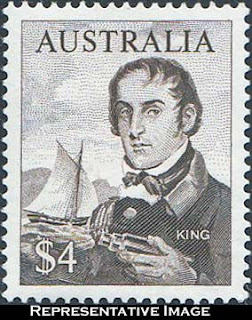 In their large party on the sailing ship Cumberland were also Mary Copland Lethbridge (1805-72) (Phillip’s sister, and also the wife of Harriet’s brother Robert).
The couple sailed too, along with Harriet's Nanny, Phillip’s brother-in-law Hannibal Macarthur, and Miss Waring, the future governess of Hannibal’s family.
Mary Copland Lethbridge had only married on 25 July. Age twenty-one, Mary too was pregnant. perhaps just three months by comparison to Harriet’s more advanced stage.


Help needed on the trip, whatever the price
On arriving at the port of Plymouth, Harriet wrote her husband that she had found that on their pre-arranged ship ‘there was no surgeon engaged, and as it is almost probable I will confined ere I get to Port Jackson I could not [make myself]….sail without a nurse.’
She found one, Mrs Rowland, for £100 (the equivalent today of between £740 and £40,000 depending on what conversion method is used).
‘I did not expect to give her so large a sum but no woman, who was qualified for such an event, would give up her practice here without a handsome remuneration.’ And Harriet liked her ‘very much.’
It sounds as if Mrs Rowlands who a professional midwife and children’s nurse who was using the opportunity to leave her business and settle in Australia if she took to it.
On the four-month voyage Harriet was feeling the stress of mothering her big family at sea.
‘Our dear Charles’ was poorly but ‘rallied amazingly the last month we were at Sea, and I now beginning to hope he will be spared... but my Nurse says, he is too sensible to live.
Harriet was also ‘most anxious’ about Essy as he had ‘much spirit’.
Seeing so much of their (cooped up) children on ship must have meant mothers got to know them better than at home, and worried about their developing characters.
‘Mrs Rowland, my nurse, I find very handy with them. I do not now I should have done without her as Charles is quite as much, if not more trouble, than the Baby.’
But at least the party on the Cumberland weren’t in livid seas beset by fierce winds. And there were no epidemics. ‘We have had a fine breeze and … the Weather is beautiful’

Miscarrying at sea
Without a surgeon, women on ships had to help each other if they started losing their foetuses, as roughly 30 per cent of all women did at that time.
On 13 October Harriet wrote that after several days of Mary being poorly, 'This morning I was called up to her at 3 o’clock as she was very ill, she has since been very bad and it has ended in a miscarriage. She is now doing well.’ Seemingly Mrs Rowland wasn’t expected to help.
~~
Their voyage took four months. Published extracts from Harriet’s letters don’t speak of homesickness or of expectations of NSW or even the discomforts of pregnancy on sailing ships.
Her main feelings are that she misses her husband and is concerned for the welfare of those in her party.

After landing
Luckily Harriet landed on 24 Jan 1827, sixteen days before baby Arthur Septimus Parker King was born on 9 February. He seems to have been her last child.
Mary went on to have eight live children.
Finally settled, Harriet wrote to Phillip on 20 March that their Nanny was going to carry on working for the family, despite her brother trying to persuade her to marry a man he knew in Sydney.
And the nurse, Mrs Rowland, decided to ‘return to England, her time with me is nearly up.’
Five years later Harriet’s (poorly) husband and eldest son returned safely from Patagonia in 1832.
Harriet and Mary founded some of Australia's 'royalty'. 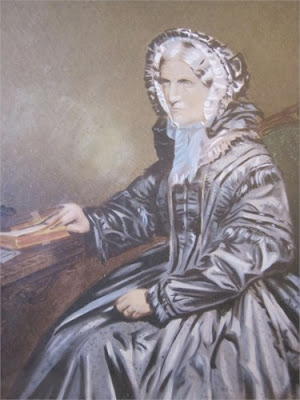