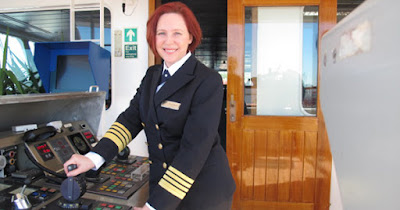 Regent Seven Seas has just appointed Italian Serena Melani, 42, as captain of the 48,075-ton Seven Seas Mariner. I think she is now the tenth woman in the world to attain such a position.

Although women have had Masters certificates for over 140 years, women were only allowed to become captains of cruise ships in early 2000s.

Today, as I post this blog, her ship is at Boca da Valeria, Brazil, on an Amazon cruise. Seven Seas Mariner (pictured) was one of the world's prize-winning first all-suite, all-balcony vessels in 2002. It carries 700 guests and 400 crew. 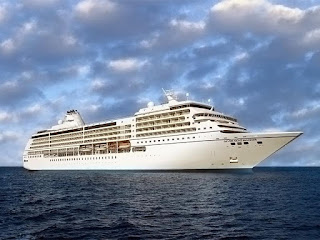 From Livorno (Leghorn), Captain Melani graduated in 1993 as yacht engineer. She is the first Italian woman to become Captain of a cruise ship.

Serena is by no means the first Italian woman to qualify. She was preceded in 1918 by Elise Belluomini of Viareggio, the port on the west (Tyrrhenian Sea) coast.

Elise travelled 45 km south to train at Livorno nautical college, despite all odds. Local people thought when she told them of her ambition that she must 'certainly be possessed by the devil'. But a veteran sea captain mentored her - as so many generous senior men have since helped women with their start in seafaring.

It was almost certainly the famous institute founded in 1863, which five years after Elise qualified became the Istituto Nautico Alfredo Cappellini (pictured, thanks to http://www.panoramio.com/user/855041/tags/brigantino%20cappellini).

Today the Institute still offers training for Merchant Navy personnel, but seemingly in Elise's time was for the Royal Navy too. 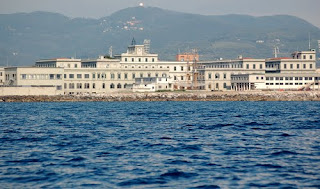 Elise qualified circa March 1918, when the First World War was still being waged. In fighting spirit she told a Paris correspondent:'I will show my crew that a woman can be as brave as any man'.

It's not known if Captain Belluomini ever commanded her own ship. However, she would have been unlikely to do so for at least another ten years.

Any captain usually takes that long. Women tend to have to wait longer again. This is not least because shipping companies are happy to publicise equal opportunities achievements but cautious about the officers to whom they entrust expensive real estate, especially if they fear passengers will worry about a woman being in charge.


Serena Melani
The article below is a straight lift, with thanks, from this site: http://www.stuff.co.nz/travel/cruising/77732261/in-a-first-a-woman-takes-the-helm-of-a-regent-cruise-ship: 'In a first, a woman takes the helm of a Regent cruise ship' by GENE SLOAN,March 10 2016.

'Another glass ceiling in the cruise world has been shattered as luxury line Regent Seven Seas announced its first female captain.

Serena Melani, 42, of Italy, has been appointed the new master of the 48,075-ton Seven Seas Mariner, a position that puts her in charge of 450 crew. Melani becomes one of just a handful of women to command a major cruise vessel at any line.

"Of course, I am very proud," Melani told USA Today in an exclusive interview, noting that breaking into the still-very-male-dominated world of shipping wasn't easy.

"It was hard finding a job (on a ship) at the beginning of my career," she said in a phone call from Mariner, which was sailing along the coast of Brazil. "It took me five years."

Melani's first job at sea was with a cargo ship where she said she was the only woman on board. She also worked on oil and gas tankers for several years before moving to cruise ships. She joined Regent in 2010, quickly rising through the ranks from second officer to safety officer to staff captain.

"I know she will perform admirably in guiding Seven Seas Mariner as she sails from the Caribbean to Alaska," he said.

As is often the case with people who work on ships, Melani said it was a lust to see the world that first got her interested in a career at sea. She grew up in a little town along the coast of Italy, and she said she knew from an early age that she wanted to spend her life exploring.

"It is a very gypsy life; you are most of the time away from home," she said, noting that that's just fine with her. 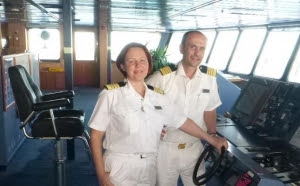 Melani and Captain Teo Srdelić, from whom she took over the Seven Seas Mariner last month.

Melani spends about six months a year at sea. But even in her off time, she gets antsy to hit the road, along with her husband.

"When I am 'home,' I am travelling," she said. "Not by boat, because I want a change, but we like to move by motor bike or car depending on the season. I really enjoy the mountains. At least two or three times a year I go to the Italian Dolomites for hiking and climbing."

Melani said books about travel, particularly tales of women travellers, are always by her nightstand. And she's always looking for the next adventure, which in some cases can be had just outside her floating office. Regent ships are known for globe-circling itineraries that often include stops at off-the-beaten-path locales.

"On my last trip here on the Mariner, we went down from Lisbon to South Africa, and we visited several West African ports," she noted. "It was a beautiful experience."

Melani joins a very small circle of women who have commanded a major cruise ship.

Royal Caribbean is widely credited with hiring the first female of any nationality to command a major [cruise] ship, Karin Stahre-Janson of Sweden, in 2007, and the line added a second female captain from Portugal in 2008. Britain's P&O Cruises, Cunard and Silversea also have appointed female captains over the past five years.TNS'-- 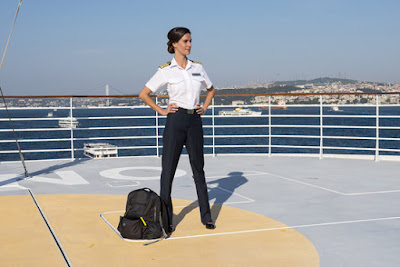