'Lesbian ship' US navy to set off on Friday 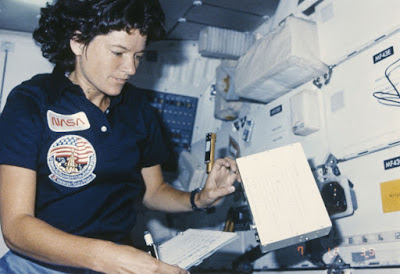 On Friday a ship named after a pioneering Dr Sally Ride (1951-2012), the first US woman astronaut, will set forth. Naming the ship after her is in the same tradition as naming a vessel after civil rights leader Harvey Milk, earlier this year. Will it be as controversial?

And the sailing forth of the R/V Sally Ride raises the question of who would we in the UK choose? So many LGBTQI pioneers would be appalled at being associated with the military. I can't ever see there being an HMS Peter Tatchell or HMS Sue Sanders. What about you?

And anyway UK naval ships are named after previous UK naval ships, as well referring to concepts such as Illustrious, Invincible. Yes, they're about spin, but it's military-related spin. So I wonder if there ever could one called the Justice, the Diversity, the Out& Proud.

READ MORE ABOUT IT
The text below is a doctored lift from this article, US Navy Names Another Ship After An LGBT Pioneer, by Cody Gohl 11/3/2016: http://www.newnownext.com/us-navy-sally-ride-ship/11/2016/ I've just added some pictures.

The United States Navy will commission a ship Friday named for Sally Ride, the late lesbian astronaut who in 1983 became the first American woman in space on the STS-7 mission.

Ride, who died of pancreatic cancer in 2012, was not publicly out during her lifetime, but had been in a relationship with Tam O’Shaughnessy for over two decades. 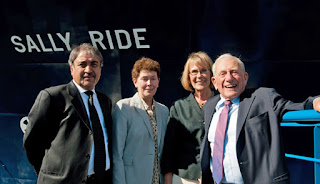 “I think she’d be thrilled,” O’Shaughnessy told The San Diego Union-Tribune, regarding the R/V Sally Ride. “There are so many connections — Scripps and being female and having the first academic research vessel being named after a woman. That’s just keeping with what she was all about her whole life.”

“She probably would want to sign up for an expedition,” she added. 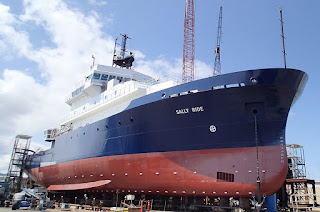 The R/V Sally Ride (pictured here under construction) is a new vessel classified as an AGOR ship, or one that will be used for auxiliary general oceanographic research. These types of ships are generally named after trailblazing explorers—this marks the first time one has been named after a woman.

Owned by the Navy but operated by the Scripps Institution of Oceanography, the vessel will gather research on the planet’s oceans in order to combat ecological decay. It will set off Friday for its first voyage to investigate plate tectonics. 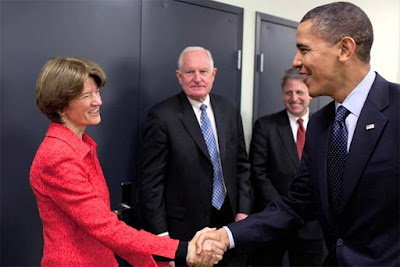 Sally Ride meeting President Obama. She was a member of the President’s Committee of Advisors on Science and Technology. Photo credit: Whitehouse.gov