Black sailor John Webb became the third party in the most public and virulent naval divorce story ever, in 1784-87.

This is the first time in over two centuries that his reported experiences  have been examined.
However, the couple for whom he worked  have been discussed in Margarette Lincoln’s Naval Wives and Mistresses, pp114-118.
--


In racialized London and the Medway towns John Webb’s endlessly contradictory tales about whether or not he had had sex with a naval captain’s wife – and how willingly – involved him in great trauma in the Ecclesiastical Court and Doctor’s Commons.
The impugned wife, Ann Inglefield, fought to prove she never had such an avid connection with the black servant.
John Webb was usually referred to as the Black Slave, the Negro, the Black servant, the Boy, or the Black. People took to him for his open, free and innocent way of talking.
Illiterate, he signed his name with an X. No-one drew a picture of him, or of Ann.
Born around 1767 his origin is unknown. In one of the courts he was referred to as 'the Ethiopian', for no clear reason.
John was said to have been ‘taken’ (captured) from a Flag-of-Truce Spanish ship by Captain Affleck (which could have been Edmund or his brother Philip, both of whom served in the Caribbean, which is where they could have met Webb)
As a captive John Webb had then been given work in a naval vessel. It wasn’t unusual. Non-British men were as much as ten per cent of some crews at that time. Hands were needed and black hands were acceptable for domestic work. 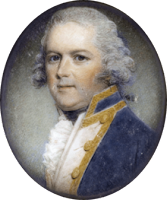 Then, redundant in May 1783, Webb was found domestic work with Captain John Nicholson Inglefield (1748-1828), Commander of the guard ship Scipio at Chatham. (Pictured).
John was paid as if he was part of the crew. Unwaged, he also worked in the Inglefield home in Singlewell, Gravesend.
The mistress was Ann Smith, later Inglefield (1754-1834), a Greenwich woman who’d married Inglefield ten years earlier. Their children were Mary Ann, Lucretia, Miss, and Samuel.

The Inglefield’s legal case focused on John Inglefield’s allegations that, over a year, Ann had been soliciting ‘indecent familiarities’ with a Black servant, and even committed adultery with him on the Scipio, thus bringing shame onto Inglewood.
The claims and counter-claims in pamphlets and newspapers varied. And the recorded court proceedings are very confusing, not least because some evidence was not brought into court.
There was never a real resolution:
~ The alleged cuckolder John Webb said that he hadn’t done it, but also that Inglefield had told him to do it because he, Inglefield, wanted to watch through a spyhole. Webb claimed he hadn’t wanted Ann Inglefield’s advances, but he also boasted about what they’d done together, to another servant.
~ Ann said she’d never done anything. Her servants said so too. They swore that ‘the Black had always treated her with Respect’. There had been no ‘joking and laughing with the Black, and not any nodding and bidding him not be familiar with his Mistress.’ By contrast John Inglefield said he had proof. The servants saw their master as jealous, a blusterer and a bully.
~ John Inglefield claimed at one point he’d found Webb and Ann in bed, though most of the discussion mentioned only a kiss. He also referred to an anonymous tip-off letter, but it never appeared in court. It was proven he lied, and yet he was given custody of the children.

Pressures on every side
The court cases went on for two years. Ann sought to clear her name. Her husband fought hard to shame her, justify himself, and, seemingly get away from a marriage that wasn’t financially rewarding enough.
In that time John Webb was under two lots of pressure.
~ Initially this was in Chatham in the naval world. Inglefield beat him much and allegedly made him so frightened that he gave false testimony about his relations with Ann, to please his master. Naval men who worked for Inglefield corroborated the adultery story.
~ Secondly, Ann’s civilian friends and mother in Blue Stile, Greenwich worked to bring Webb to London and get him to make a true statement. They even convinced him that Inglewood would trepan him.

Recanting
Eventually Webb recanted his first claim, saying he hadn’t before realised the meaning of a legal oath.
He refused to give more evidence against Ann. ‘I do on my oath declare, declare that the said accusations are false, and that the said Ann Inglewood always behaved to me with the utmost decorum, nor were ever the least indecent familiarities between us.’
In London Webb later declared ‘that the Reason he swore his Mistress ever took improper Liberties with him, or he with her, was because Captain Inglefield challenged him in the most severe Manner, and told him he had had an improper Correspondence with his Wife, and said, he had seen him kiss her, which the Deponant repeatedly denied.’
However ‘the Captain persisted that he had seen him, damned him, and stamped with his Foot at him [Webb] in a Passion, which so alarmed him that he was frightened into a false Confession.’
John Webb later explained ‘that he wished to ease his Conscience of the Perjury he had been guilty of, by disavowing, in a public Court, what he had before said, and thereby make every Reparation in his Power, for the Injury he had done his Mistress’.
It’s not clear whether Ann forgave him.

The aftermath
The case collapsed because, among other reasons: 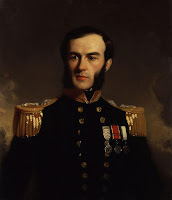 Both Ann and John lived on for over half a century, apart.  Their son Samuel founded a naval dynasty, including Arctic explorer Admiral Sir Edward Augustus Inglefield (pictured).
John Webb’s next steps are not known.

John Webb’s problems and pleasures
It appears that racist attitudes towards John’s colour meant that the adultery could be painted as all the more reprehensible.
Even Ann’s own counsel, Dr Harris, thought the adultery claim was ‘improbable to the last degree’ on the grounds that Ann wouldn’t stoop so low. He said: ‘I won’t put myself to the pain of contrasting a poor black Slave to him [Inglewood, as a paragon of gentlemanly values].’
In reality, it appears that the people who know John Webb were quite happy to ignore colour. Miss, the youngest Inglefield daughter, felt very affectionate towards him.
And he was having a regular relationship with at least one of the servants, Elizabeth Wells, and with someone called Nanny, which may have Elizabeth's other name.
Other shipmates and servants did not shun him on racial grounds (or certainly that’s not recorded). In other words, he was integrated when among his peers.

Implications
This sorry, vitriolic saga reveals, accidentally, the life of one black male sailor. Who knows how typical it is of black servants in naval households. Certainly no other case like this has come to light.
This particular young man seemed to be someone who operated either cannily or confusedly. He was not always honest: he’d stolen and sold off Inglewood’s coat.
What’s interesting is that the alleged offence was only once blamed on his being black. A barrister thought that being black meant someone from a country where people had hot (passionate) constitutions.
I hope someone does a thesis or book on John and the Inglewoods. It's ideal for a study of naval family life, and of race in the Navy.

The full stories in participants' own words can be read on line via the British Library.

Ann Inglefield:
‘The arguments of counsel in the Ecclesiastical Court, in the cause of Inglefield: with the speech of Doctor Calvert, on the twenty-second of July, 1786, at giving judgement’, London, 1787.

‘Mrs. Inglefield's Justification, containing the proceedings in the Ecclesiastical Court ... 1785, taken in short hand by W. Blanchard; with a preface and notes by Mrs. A. I.’  J. Sewell, London, 1787.

John Inglefield:
(et al) including Webb’s testimony: ‘New annals of gallantry : containing, complete collection of all the genuine letters which have passed between Captain Inglefield, and Mrs. Inglefield ; Signed with their respective Names, relative to a Charge brought by the Former against the Latter, for Partiality to her Black Servant. To Which Are Added, The Black's Affidavits, pro and con, and Mrs. Inglefield's also, upon this extraordinary Business. Likewise, The Letters of Mr. Mills, Man-Midwife, of Greenwich, relative to his Conduct since the Suspicion of this Strange Connection.’ R Randall, London, 1787.


‘Captain Inglefield's Vindication of his conduct: or, a reply to ... “Mrs. Inglefield's Justification.”  J. Murray, London, 1787.