Women, rather than men, traditionally cooked and served food in homes on land. So it’s easy to make the assumption that they would do the same for people in transit.
But public food service is about status and perks. On ships it was, and still is, a gendered matter. And for over a century women were only allowed on ships as stewardesses (room maids). 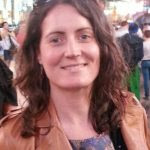 Frances Steel (pictured), who teaches Pacific History at the University of Wollongong, has just written an interesting brief history of waitresses on US ships, especially Matsons' vessels (pictured above, note women’s maid-like caps).

In the early twentieth century women were excluded from working in ship's dining rooms. My general knowledge of gendered employment practices on ships leads me to surmise that there were two explanations:

1.Shipping companies’ managers wanted to replicate the kind of fancy service delivered by hotels on land. To make voyages seem like desirable, even swanky, experiences - rather than miserable endurance feats - they employed men to serve in ship’s dining rooms.
Elite-seeming maitre d's, wine waiters, and fleets of men in immaculate black who could explain French items on the menu, conferred more distinction on the dining experience than 'girls' in frilly pinnies. Think Maxims, Paris, not Ye Olde Cottage Tearooms.

2. Men typically jockeyed with women for access to roles that brought the possible of lavish tips. Waiting at tables was the very best of these opportunities, especially when passengers were so tipsy that they didn't notice the size of the gratuity they were bestowing.
Waiters developed skilled 'performances' that enabled them to get the edge over passengers, as their historians Philip Crang, Gerald Mars and Michael Nicod show. Camp gay men on ships became especially good at being amusing as they served meals.

I had long known, in passing, that the US was the first English-speaking country to break through the gendered divide and allow women to become shipboard waitresses in the 1930s.
But now Frances Steel gives the definitive US story, briefly.

The UK timeline is:
•  Buries Marks and Medomsley tramp ship companies, as a gimmick (early 1950s)
•  Union Castle 'stewardettes' (1960s)
•  Many companies (early 1970s), when the advent of buffet dining in shipboard cafeterias lowered the prestige attached to dining. Therefore women could be allowed into this shipboard role.
In the UK women had been allowed to be cashiers in shipboard restaurants on White Star vessels, at least to the US, from the 1920s. This history is inadvertently revealed because Blanche Tucker was feted as one of the first women to be trained to take charge of a lifeboat, in 1929. Mrs Tucker was chief restaurant cashier on the Majestic (pictured).

However, still today almost all restaurant managers on cruiseships are male. Waiting in ship's bars remained a gender-segregated job out of bounds for longer. Cunard's first female bar tender (as opposed to person circulating the room to solicit drink orders) was in 1987: Sabine Machado-Rettau. (Pictured)

‘The waitresses, appointed through the Marine Cooks and Stewards Union and formally rated as merchant mariners, replaced male dining room stewards.
‘The company looked to women ostensibly in response to the shortage of first-class stewards on the U.S. west coast. Even so, men continued to be hired for service in the stateroom and public room, and held all the senior positions, including head waiter.’

What is this figure, a seagoing waitress?

Frances thinks that in the 1950s 'comfort – if not safety – may have played a part in Matson’s strategy. On these new transpacific ocean liners, the figure of the waitress contributed to the restored appeal of sea travel, shorn now of its wartime privations and dangers.'
She sees women on Matson's new luxury transpacific  liners as part of the company's narrative about America’s post-war ‘rediscovery’ of the Pacific, representing it as a space inviting white bourgeois relaxation, and consumer comfort and freedom.'

Frances argues that the figure of a woman waiting at tables is complex: 'in contrast to the air, where hostesses were ostensibly trained homemakers in waiting, this aspect of gendered domesticity of female employment on ships appears to have been more ambiguous.'
Also, such gendered public servers of food have to be seen in context: 'The figure of the ocean-going waitress embodied interlaced themes of post-war modernity and mobility, labour and consumption.
'This change in the working world at sea also gendered the U.S. presence in the Pacific in more layered ways, serving as a counterpoint both to the masculine deployments of the Pacific War and the sexualised fictions of Hollywood’s South Seas.'
--
I can’t help thinking that if Elvis Presley's Don Juan character had travelled by a Matson vessel in Blue Hawaii (1961) his ship-board steak would surely have been served up by a woman. But she’d be represented as not sexualised or glamorous enough to be girlfriend material. 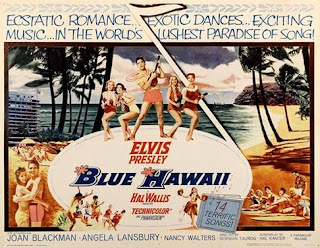 I do urge you to read the article in full, at http://www.auswhn.org.au/blog/waiting-women/.

The author can also be followed on Twitter @FrancesMSteel.

You can read more about women in shipboard catering in my book From Cabin "Boys" to Captains: 250 years of women at sea, pp.214-218. Greta Foff Paules has written interestingly about waitresses on land in Dishing it Out: Power and Resistance Among Waitresses in a New Jersey Restaurant.


Lesley Poling-Kempes studied US track-side women in The Harvey Girls: Women Who Opened the West. There's also been a movie about them, starring Judy Garland. Seagoing waitresses have yet to become stars of the screen. The nearest thing in the UK is the waitress at 'Milford Junction' in Brief Encounter.