The black cook, the cross-dressed wife, and the ship's hot kitchen 1852

Here's a little fragment for Black History Month, though it's mainly about a white woman who  worked her passage from New York to Britain. Her mate - but seemingly not her accomplice - was a 'man of colour.'
The emotional element is absent from this tale, which appears in The Bradford Observer, 26 August 1852.  (I am grateful to John Ellis for drawing the article to my attention. ) 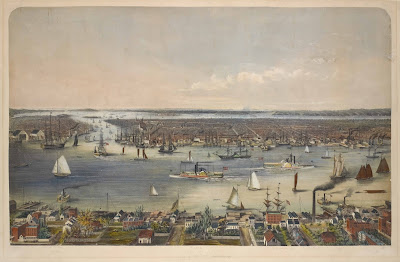 
On Good Friday 1852  'a respectable female from Spilsby' (Lincs)  married a Mr Bealby. He turned out to a ne'er -do-well.
He was supposed to be opening a grocery shop in Boston, Lincs. But instead he booked them onto a ship from Liverpool to New York, telling his wife they were going to Scotland for a few days to see friends.
When they got to New York on this unnamed ship, he wasted their money in idleness then wanted to go on to California. At that time it was seen as a land of opportunity, including for gold prospectors.
But 'his wife having no faith in him, refused to accompany him and decided to return to England.' 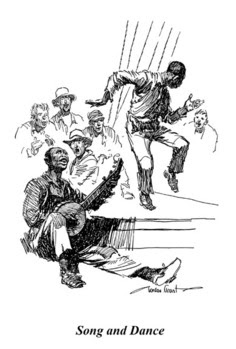 'To accomplish this, having no funds, she donned  a garb that would insure her from insult, and obtained  an engagement as a cook's mate on board a vessel bound for Old England. (The cook himself was a man of colour.)'
Black, brown and disabled seamen, especially those with peg legs, were often employed as ship's cooks at that time. real versions of Long John Silver were assisted by able-bodied boys.

See this poem and image about Billy Peg-Leg's fiddle, by Bill Adams (https://allpoetry.com/Billy-Peg-leg%27s-Fiddle)

I've a pal called Billy Peg-leg, with one leg a wood leg,
And Billy' he's a ship's cook and lives upon the sea;
And hanging by his griddle
Old Billy keeps a fiddle
For fiddling in the dog-watch
When the moon is on the sea.

There is a somewhat happy finale to Mrs Bealby's trip. She ended the voyage 'in the exclusive possession of her secret'. After walking 57 miles she and arrived 'in her sailor attire', at her parents’ house at 2 a.m..  We can only imagine how traumatised she must have been.
This saga feels a very interesting combination to me: Mrs Bealby and the cook sharing a galley, and presumably a sleeping space.  It was extremely rare for women to be allowed to be ship's cooks at that time, except on very small family-run vessels.
Of course I want to know what happened.

1. What was it like to be cooped up together 24:7 producing food for perhaps hundreds of people? They were trapped in a tiny space. They worked side by side for maybe 35 days (It can reasonably be assumed that they were on a sailing ship. Steamships did not really start on that route for another decade. The voyage took 7-10 days) 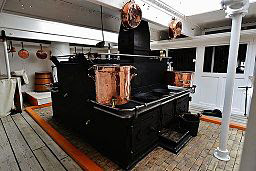 Galley of HMS Warrior, as built ten years later and in more pristine condition than a working merchant ship would have been. Wiki Commons

2. As such precise details about her marriage were available surely Mrs Bealby, and therefore the cook, could be tracked down?
No such luck. Census returns and directories show that there are Bealbys in the area but none that fits this picture. No wedding record exists.
We are left with a story of a stigmatised seaman (the cook)  working in a mixed-race team with an upset person who withheld a major secret from him  for five weeks.

3.So did the cook know? Did he side with Mrs Bealby in deceiving the ship's officers? We cannot know if he ever guessed her sex, or even, perhaps, her distress?

4. Did the cook - and crew - ever find out later? Probably not, because the newspaper report revealed no details about the ship. And maybe Mrs Bealby used another surname while on board, anyway.

5. Was this the first black person she had met ( as she didn't live in seaport or big city)? And what did she learn from the encounter, in a working environment which is often hot and irritable? We can only guess how that proximity affected her attitudes to race.

This is one of those stories that needs to developed into fiction. I hope someone enjoys the process.