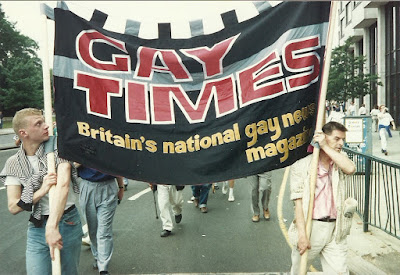 Mick Belsten (pictured far right) was a rare seafarer. Leaving the camp-ified liners, for two decades he helped shape the emerging out and proud LGBT+ culture on land. 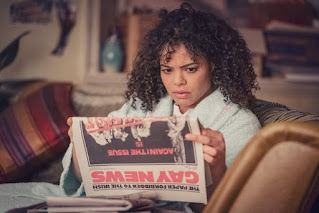 If you watched episode 2 of It’s A Sin, Russell T Davies’ new TV series about gay culture and HIV/AIDS in the 1980s, then you’ll have noticed the way gay magazines were crucial sources of alternative information. (See pic).Mick shaped that world. Indeed he could have been part of the production team that brought out the very magazines you saw on screen in this week’s programme.

In the 1950s, 60s, 70s and early 80s many seafarers, particularly stewards, enjoyed the exceptional ‘camp heavens’ on ships. Their history is recorded in Paul Baker and Jo Stanley, Hello Sailor! https://tinyurl.com/Hello-Sailor-book. I know a closeted officer who lost his maritime job after a friend sent him Gay Times, which effectively outed him.

Mick probably gained his first experiences of unofficial queer solidarity, 24:7 fun, and relative freedom by being part of that maritime counter-culture.

Such were merchant seamen's privileges that, when discussing the Gay Liberation Front and its informal successors, one seaman crowed to me ‘At sea we didn’t need liberation movements. We already were liberated.’

After being a steward on a gay-friendly P&O liner he came back from Honolulu, a 'graduate' of these queer universities afloat. And he metamorphosed into an LGBT+ activist, for example demonstrating against the notoriously hypocritical 1971 Festival of Light. (See pic at Trafalgar Square: Mick, right, seated, with arm upraised.) 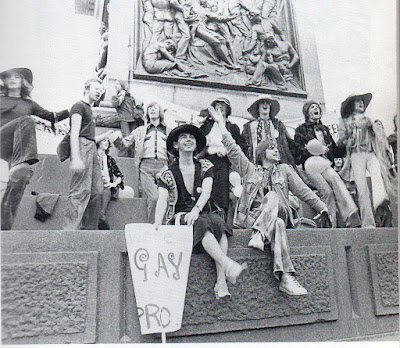 From the 1970s Mick helped produce the Gay Liberation Front's influential journal Come Together. He managed Hammersmith’s path-breaking Incognito gay bookstore, at a time when police raids and censorious clampdowns were fruitlessly attempting to impede the free flow of LGBT+ cultural products.

Among the LGBT+ culture ‘architects’ Mick worked with were Alan Purnell and Alex McKenna. His multi-tasking helped create the emerging gay magazines such as Zipper, HIM Exclusive, Gay Times, Him Monthly, Mister, Vulcan, and Out. 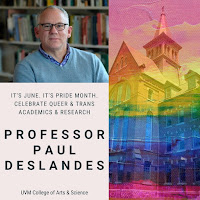 Expert on the gay pornography of the period, Paul R Deslandes (pictured) has summarised the significance of these innovative types of publication. With their pictures and experimental layouts they emphasised

Mick’s many ad hoc roles in these magazines - with their varying degrees of pornographic content - included compiling news from overseas and handling the small ads.

Lonely-hearts-style classified ads may have been individuals' tiny expressions of privately-held desire. But, when published, these ads were also crucial building blocks that helped create a world where people could be honest about needs that had previously been stifled.

For many isolated gays in remote places such adverts were evidences of the new openness, and of all that available to questors. The lines were, virtually, as liberating as shipboard life had been.

Mick typed up copy that countered the old homophobic  articles in mainstream papers.

Working – often precariously– in such media Mick was a key gatekeeper in what Dr Harry Cocks sees described as the radical focusing role of such as small ads. See https://www.amazon.co.uk/Classified-Secret-History-Personal-Column-ebook/dp/B0034FJGF8

As a small-ad supremo - handling postal orders and trays of filing cards in meticulous sequence - Mick was in the position of ethnographer, as well as enabler in those analogue times.

He didn’t leave records of his own subjective experiences shaping this brave new world. But from the bits I’ve pieced together I can see that Mick Belsten is an unsung hero of queer mobilities and of maritime history's impactful diversity.

He’s the bridge between the hundreds of seafarers enjoying personal pleasure in exceptional places, as pioneers, and the millions on land who went on to shape an affirming new counter-culture for all.

I found out about Mick too late to put him in our book and exhibition, Hello Sailor. But now, thanks to the collaboration of his friends and colleagues, I’m writing about him and giving talks about him.

See Outing the Past’s list of available talks, Feb to Sept, 2021. (https://www.outingthepast.com/otp-2021-festival-gazette.) From March 2021 films of all talks will be available on YouTube. So keep looking at https://lgbtplushistorymonth.co.uk/

Much gratitude to Mick's old friends and colleagues. This quest would not have been possible without them.

Great to see Mick paid this well-deserved tribute. Even though I look totally pissed in that Gay Times staff photo. (Complete with a sherry bottle in my hand!) What was I thinking of?
Alex McKenna