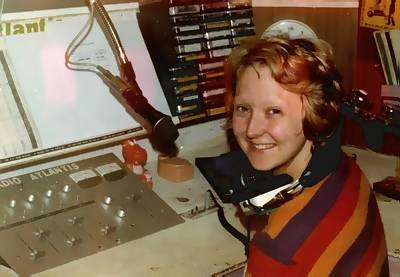 ... Or rather, she would have worn rubber gloves, had been available on board her rusting old ship.

So I found out when interviewing Debbie England (now Royle), in land-locked Cheshire this week. She was Britain’s first woman DJ on Radio Caroline and Radio Atlantis, in the great days when pirate radio ships rocked the airwaves.

Debbie was aboard these North Sea music heavens because she was accompanying her husband, DJ Steve England.  They had run a mobile disco service together in Deal, with Steve’s sister Paula and brother Rick.

But in 1973 when Steve got his Big Chance – to go off and DJ in this exciting new world of pirate radio – he took it. Debbie and Paula continued the disco business in Deal for a while as the Disco Dollies.

A few months later Debbie was allowed a quick visit to Steve aboard this semi-co-operative on Mi Amigo. So she went the 5 miles out to the old ship anchored off Scheveningen in Holland.

Getting from tender to ship could be alarming. Big Dutch crew members virtually hauled her on board when the waves allowed her near enough.

The most exciting-sounding pirate radio ship in the world was a dump.  It was scruffy, basic and ad hoc. ’I was shocked when I saw inside. But you got used to it.’

And she stayed on even though ‘I’m not that brave and I was usually too scared to even ride a bike. I certainly couldn’t swim.’  Sometimes they were aboard for weeks at a time. She learned ‘The North Sea can get pretty rough.’

Debbie’s main role was in the galley, cooking ‘mainly stew.’  She admits that as a young untrained woman of 23 ‘I wasn’t much good’ with the food. But she coped when fresh supplies from shore didn't arrive in time and even in wild weather when the big pots threatened to slide off the galley stove and scald the poor chef.

Aside from cooking, Debbie DJ’ed from around 1973. She was on Radio Caroline, and then on Radio Atlantis when Steve moved there in 1974.

Radio Atlantis was an old trawler stationed off Knokke on the Belgian coast. The trip out from Vlissingen in Holland was about 14 miles. 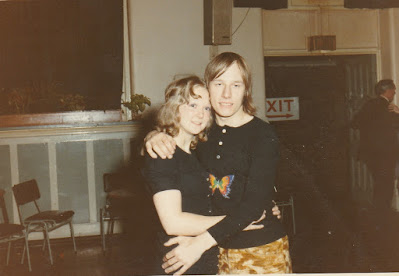 Picture: Debbie and Steve at the Astor Theatre in the 1970s. Picture by Steve England.

A PIRATE WOMAN’S PLACE IS AT THE SOUND DECK

And in the studio she succeeded because, she told me unassumingly, ‘I’ve always been good at chatting.’  The technical skills she’d acquired when running the disco ashore meant she needed no techie to help her broadcast to the millions on land. And her knowledge of pop music must have been huge.

She graduated to doing two-to-three hour-long shows, which she remembers were called something obvious like ‘The Debbie Show’. But ‘I don’t think I thought I must play songs because they’re  by women.’

If she’d been too assertively feminist that might have meant she couldn’t carry on. It was very much a situation where it was crucial to muck in with your peers, to be a co-operative shipmate..

Today Debbie doesn’t recall the first number she played. But she can’t forget the last track she placed on the turntable as Radio Atlantis was finally towed into Sheveningen in 1974: the Three Degrees singing When will I see you again?

‘It was fun’, she sums it up. ‘It was just all about having a good time’ in trying circumstances. ‘ A bit like wild camping. ‘Hard and quite tough. But an experience.  You’d never get it again. It makes you a stronger person.’

This modest pioneer’s story sounds almost like the Ann Bonny story of 1719, aboard Captain Calico Jack Rackham’s vessels. You can read about Ann’s situation in Captain Charles Johnson’s 1724 classic, A General History of the Robberies and Murders of the most notorious Pyrates.

Because I’ve written a history of women pirates throughout history I can see ways that being a woman ‘camping out’ on a grubby pirate radio ship in the 1970s had similarities with being a woman on a real pirate ship in the early 1700s.

1. You were part of an off-shore team who were outlawed. The ‘rebels’ felt themselves to be fairly legit – and mis-perceived. That sense of ‘us against them’ sometimes bonded them (and you).

2. You were usually the only woman in a masculine culture, living with men who were essentially techies.  Few of them cared to do domestic roles but they appreciated home comforts e.g. palatable food.

3. You cooked and cleaned – because that’s what women traditionally were expected to do.

4. Often you were the partner of a senior-ish man on board.  That meant the rest of the  men aboard saw you as out-of-bounds sexually. Men were not rivalling each other for access to you, so the ship was not a powder keg. And no liberties taken, unlike today on ships where sexual harassment is a major problem.

5. You could sometimes grab the occasional opportunity to play a more active ‘masculine’ role when it was a case of all hands to the pump. Such openings including DJ-ing in Debbie’s case, and fighting enemy vessels in Ann Bonny’s case.

6. The ship you were on had been ‘acquired’; it was not purpose-built for the task. So the team were always coping ad hoc with an imperfect situation.

7. Rough weather really mattered. So did your ability not to be seasick.  (Some studies think women are more liable to suffer mal de mer).

8. Sometime you and your team were up against force of law and order, as when law enforcers circled round threateningly, or attacked the ship (took radio masts down) and towed the ships into port. 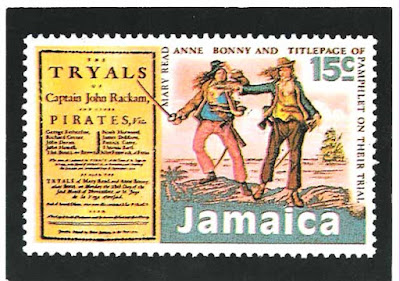 Of course there were also difference between the Anne Bonnys of the 1720s world of piracy and Debbie’s offshore radio life in the 1970s. Here are nine key points:

1. Debbie and her shipmates were not roving the seas but anchored in one place.

2. They weren’t there to attack enemy vessels and plunder doubloons, but to relay music to land – a kind of public service. DJs did not plunder other vessels. However some opponents think pirate radio abused musicians’ rights but not paying for each disc spun.

3. She was in the cold North Sea, not far away in the sunny Caribbean.

4. 250 years on, the women’s liberation movement had started. Women were just starting to glimpse that their talents had been habitually overlooked and their rights restricted.

5. Pirate DJs are never punished by hanging, as pirates were.  So Debbie was not at risk of being widowed because of her husband’s job, although sometimes prison was on the cards.

6. Your pirate radio ship was sometimes one that had no motor. You had to be towed, whereas a pirate ship of the past had sails and could move.  Those pirates had a sense of collective agency. Motility was taken for granted.

7. Debbie’s ships had chest freezers that trundled up and down the corridors in bad weather.  Tins fell off shelves. But cooks in Anne Bonny’s time contended with brine barrels, kidnapped turtles, and ship’s goats.  Like Anne’s cook (as the captains’ wife, Anne was above such things)  Debbie also had to deal with limited fresh water supplies and lack of green veggies.

8. A pirate vessel tries not to reveal its presence. A pirate radio does the opposite. Its reason for being is that it is widely audible, and visible to visitors. 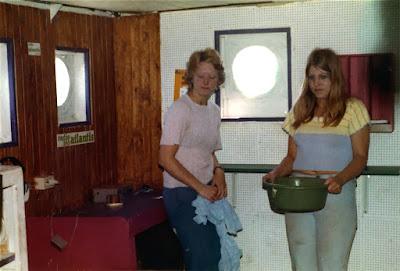 WAS DEBBIE THE EXCEPTION?

Debbie adds other women were involved in offshore radio too, after the mid-1970s.

• Kate Cary, who was married to DJ ‘Spangles Muldoon’ (Chris Cary), was working in the land-based side of Radio Caroline’s operations with him in 1972-73.

• Lynda Anderson (c. 1953-2014) was involved in 1974. She was married to Radio Atlantis DJ and sound engineer Andy Anderson. Mainly Lynda did the cooking, sharing it with Debbie.

Steve England says ‘Lynda did one show on Atlantis but, after we gave her some advice and criticism, refused to ever do another show... [However] she did speak on air from time to time in other people's shows and on the farewell show.’

Is it possible that some pirate DJs were not very tactful about the ways they gave advice to newbies? Could there be a possibility of jealousy or sexism when women stepped from galley to technology-filled studio? 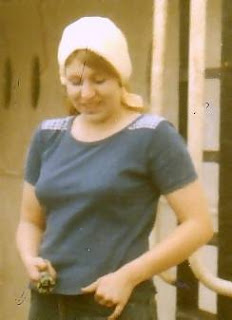 SWASHBUCKLING – OR SOUND EXPERTS IN THE MAKING?

‘Did you think of yourselves as piratical?’ I asked Debbie. She thought that was funny. Being on her pirate radio ships was more like living in a shambolic shack at sea.

But, she said ‘Yes, Sometimes. We were not trespassing but we were outside the law.’ There could be a feeling of joyous rebellion, like a waterborne version of the new counter-culture.

Women pirates sound so excitingly swashbuckling. But maybe it pays to think more realistically. A woman on ‘pirate’ vessel was a woman in a man’s world of a very specific kind.

Is there a non-glamorous way of seeing women’s role in kinds of piracy, as part of a team of defiant co-creators ?

Is there a missing sign somewhere proclaiming ‘A piratess’s place is in the galley – expect exceptionally.’

Debbie’s story suggests that when women were allowed to be involved in the ship’s main activity – relaying music in this case – they rose to the task.

Training, role models and men who were generous  helped. Debbie must have inspired so many girls on land.

Go to the encyclopaedic and picture-rich The Pirate Radio Hall of Fame at  http://www.offshoreradio.co.uk/

For more reading see my blog about other pirate women DJs at  http://genderedseas.blogspot.com/2021/03/women-djs-on-pirate-radio-pioneers.html.

With many thanks to Steve England, Jon Myer, Simon Prentice and Debbie Royle.