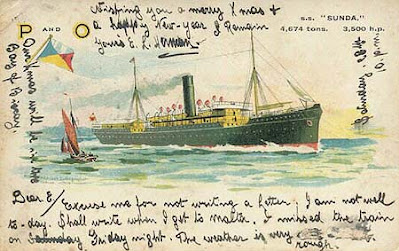 Mystery, race, gender, bravery, and power at sea in a colonial context. This is about the intensely puzzling case of ‘Amah Bird’.

Amah Bird was an un-named Chinese nanny who drowned while steaming between England and Hong Kong in 1909 on the liner Palawan (see above, Palawan's sister ship, Sunda).

In looking at the sparse and racialised story of her final moments we can see the image and realities of a certain sort of worker and voyager, more normally pictured in a nursery on land. (see pic) 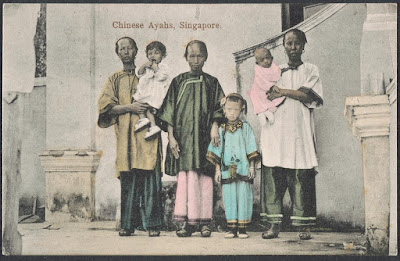 Amah Bird is a reminder that sea travelling – which sounds so delightfully liberating, and which Virginia Woolf was already reflecting upon for The Voyage Out  – can damage your emotional health as well as your physical health.
And that seems unfair when you are only at sea as an obligatory part of your job.

Not just external factors such as torpedoes, acts of nature, or navigational incompetence lead to voyagers dying en masse as, say, on the Titanic.

But also individuals on board die, singly, because of misadventure, stressful emotions and misjudgement. Some inadvertently fall overboard. Some jump. Some are pushed.

In other words, it’s not necessarily bumping into the iceberg wot dunnit. A dislocated person’s anger and fear can be a cause of maritime death too too.

BAME women who travelled for work as nursemaids, accompanying mainly European families involved in empire building, are a particularly interesting category of passenger.

These ayahs and amahs are barely known as subjects. So any evidence, including reports of their mishaps, is useful.

Reading between and beyond the lines of newspaper articles about their deaths can help reveal something about their lives and contexts. The more the column inches, the more the leads available to historians in pursuit of these occluded female worker-passengers.

The few words help sleuths begin to ask ‘What was going on, at breakfast time on P&O’s little Palawan, in the Suez Canal on 23/34 October 1909?’

Did Amah Bird jump or did she fall? Was there a murder-and-suicide combined? Or was there just a tragic mistake that terminated two promising lives, Amah Bird and two year-old Elinor Bird?

Was the amah a selfless heroine? A murderer?

Or, tragically, was she just a diligent, under-informed  carer in a messy, ambiguous and quotidian situation that became briefly elevated into a race-tinged late imperial drama?

DYING IN SERVICE AT SEA

At least eight incidents on the high seas between 1848 and 1915 brought the deaths of ayahs and amahs.  I’ve been inspired to investigate, as part of the new Ayahs Research network that is uniting scholars worldwide.

Relatedly, over the next few months, my blog will offer stories of the ten known seagoing Asian nursemaids for whom travel was fatal. Class, gender and race contribute important dimensions to these fatal voyages. 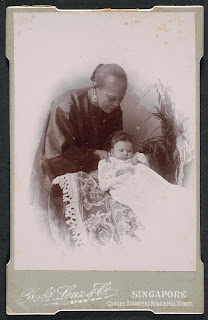 Amah Bird is the first I’ve written up here. But at least eight had preceded her in the nineteenth century. No known photos exist, but the picture (left) shows a classic representation of an amah. (Image courtesy of https://visualisingchina.net/blog/)

Not only does her overlooked voyage offer the opportunity to explore the history of one of these beloved but anonymous ‘almost-mothers’.

The story also helps people speculate about the hidden and exceptional upstairs-downstairs tensions in the nursemaid’s employment. She was temporarily obliged to be on the high seas, in conditions not of her own free choosing. What was that like? What was the nuanced context?

The exceptional manner of Amah Bird’s death enables us to wonder at the possible emotional and dynamics involved: her own, and that of those of the distant people who only read, the highly mediated reports about the last mysterious hours of this ‘British’ Deck-Class passenger in  a floating ex-pat enclave heading for Yokohama.

Chapter one of the story emerges just over a day later, on 25 October 1909. A syndicated report was circulated by Reuters, then the world’s leading English language news agency. Even the far away Leeds Mercury picked it up, verbatim:

Yesterday, while the P. and 0. steamer Palawan was passing through the Canal, a child named Bird fell overboard, and a  Chinese ayah jumped into the water after it. Mr. Jones and Quartermaster Watler [sic?] rescued them, but the child and ayah died two hours later.

The information was telegraphed, at speed, so necessarily brief. The headline implies a common imperial trope: the idea that native servants are so devoted to their white charges that they will lay down their own lives for the sake of ‘their’ children’s.

Many modern historians of empire charge that imperial subjects were regarded as only uneducated natives who acted with emotionality or irrationality.  Such a view underlines white superiority and thereby justifies imperial rule.  And Amah Bird was female, to boot; the word ‘futile’, qualifying ‘bravery’ is important here.

This new, less melodramatic, turn seems not to have been picked up by Reuters or other European news outlets.

‘It appears that shortly after breakfast the alarm was raised of man overboard. The body of the little girl Bird was seen drifting away, whilst behind was the Chinese amah.

‘A second class passenger, Mr AW Jones, who we are informed is proceeding to join the Shanghai Police force, jumped overboard from the poop deck and swam to the rescue.

‘He got up to the child, who was still alive, and supported her till rescued by the [ship’s life-] boats, the rescue taking considerable time.

‘The amah, when brought on board was dead, having been drowned ...  the child was still alive, the theory being that a blow she had received in falling overboard made her unconscious for the time and prevented her struggling.

‘Everything possible was done to save her life but she died shortly afterwards from shock and exhaustion.’

‘Extraordinary to relate, the child and amah fell from one of the lavatories through the porthole.’ 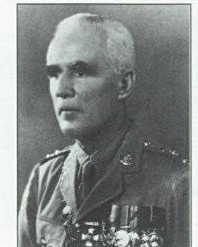 Mr Jones was feted. The British Consul at Suez was informed.

And ‘a verdict of accidental drowning was decided on.

'The burial took place at sea.'

‘The greatest sympathy was shown for Mr and Mrs [Lennox and Margaret] Bird, who were on board, and the affair cast a gloom over the whole ship all the voyage.’ 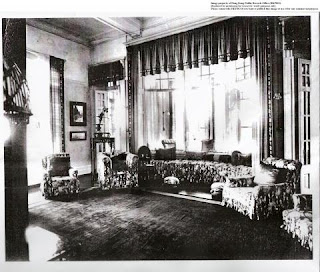 And so ends the public story. The private one of the impact on the amah’s family, and the Bird family, has never been told.
112 years later I’ve found much more information, which will be published in a detailed account elsewhere.
Exciting discoveries include learning Elinor’s name;  glimpsing the life she might have led, by seeing her sister’s career story on ancestry.co.uk; and accessing images of Bird houses in Lugard Road, Shek, which the amah would have known, had she lived longer.
Picture:27 Lugard Road, designed by Lennox Bird for his brother. Lennox lived at no 28.Image courtesy of Gwulo: Old Hong Kong

What remains is the mystery about how and why and how Elinor and the amah got through a small porthole. As someone who knows about gendered disasters at sea, my idea is as follows.

Step 1. The amah and Elinor had gone to the communal First Class ladies’ bathroom after breakfast. They went everywhere together, as they had on land.

Step 2. The amah held Elinor up, the better to look through a porthole. Maybe they were looking at a camel on the banks of the canal. Elinor struggled out of the amah’s hands and into the sea.

Step 3. The amah, on adrenalin, did the first thing that occurred to her: took direct action and tried to save the child by diving after her, rather than running up on deck to alert an officer to arrange a rescue. She may have thought she didn’t know who to tell, or felt unconfident about her skills in communicating in English. Maybe Mr Jones was alerted by the splash, or a yell from the amah. 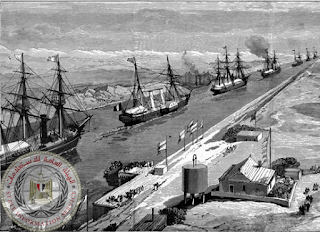 Step 4.  Once in the water, the amah perhaps found her ability to swim was poor or non-existent, so she couldn’t catch up with the child.

If Elinor was indeed unconscious (as a result of hitting her head against the hull as she) fell then the amah is likely to have panicked and felt desolate that Elinor was not able to reach out her arms to be helped.

The amah’s distressed breathing and any drop in morale would have worsened her ability to save herself, especially if wearing a hampering sari and if the Canal was cold.

One of my next stories in this series will be about a Japanese amah who deliberately pushed her little charge through a porthole, and then flung herself overboard. Fatally.

As a result of that indication of possible travel rage I wonder if Amah Bird could have been a strict disciplinarian? Or was she someone at the end of her tether about a child’s capriciousness, the employers’ attitudes, the upsetting behaviour by someone else on board in that discriminatory hierarchy?

Could extreme stress have led her to administer the utmost punishment or revenge? Any Sherlock Homes will be alert to the words ‘blow she had received.’

Either way, the amah’s promising career at the margins of Hong Kong high society and her trip to fabled England ended in tragedy for her. Maybe her actions also re-triggered wider xenophobic doubt about the general reliability of amahs as custodians of the empire’s upcoming generation.