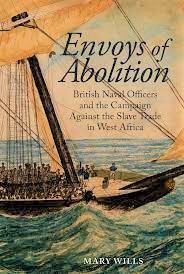 Honorary Fellow, Wilberforce Institute for the Study of Slavery and Emancipation, University of Hull

After the Abolition of the Slave Trade Act in 1807, Britain turned to the Royal Navy to carry out the unenviable task of enforcing an end to the still prolific trade in enslaved people from Africa to the Americas.

My book, Envoys of Abolition, explores the personal and cultural experiences of the naval officers serving on the West African coast in the nineteenth century.   https://tinyurl.com/Envoys-LUP 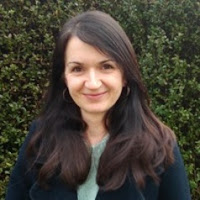 This story of pursuing slavers is most often told through the lens of a male, military operation.

However, this blog item examines some of the different ways I found that gender impacted on the lives of women and men in the course of Britain’s abolitionist campaign. 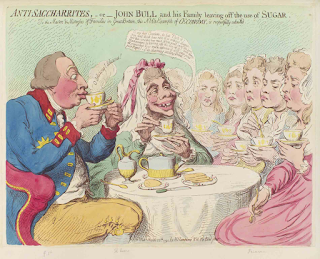 Many people were involved the pressure for an end to the transatlantic slave trade (1807) and to slavery in British colonies (1833).
Women of all classes played a significant role.

They joined anti-slavery societies and organised campaigns, such as boycotts of slave-grown sugar produced on plantations in the Caribbean.  (The Gillray cartoon (left) shows the significance of sugar politics in women's lives).

Writers such as Hannah More and Elizabeth Heyrick (pictured)  published works against slavery.

Campaigners of African descent campaigned with effect. Enslaved four times, Mary Prince wrote the only known autobiographical account of enslavement in the Caribbean from a female perspective. 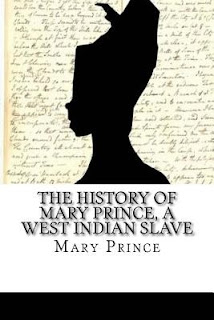 Her influential account, published in London in 1831, testified to the horrors of slavery. The History of Mary Prince, a West Indian Slave, also revealed enslaved Caribbean people’s various resistance efforts against slavery.

By the very nature of their task - intercepting slave ships and releasing enslaved people - naval officers engaged with abolitionist convictions.

The image below shows an artist's version of the capture of a large US slave barque, the Orion, by the Royal Navy's small HMS Pluto. (Illustrated London News, 1860). There were 847 slaves aboard, and this was the Navy's biggest capture ever.

"On seeing the naval officers look down the main hatch, the liberated slaves sent up a most hearty cheer, which can never be forgotten by those who heard it." 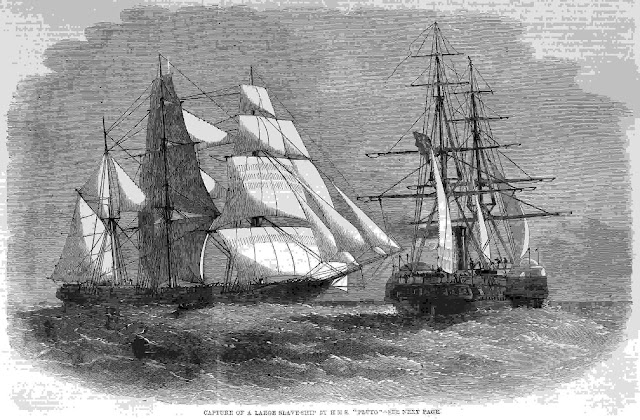 Many testimonies by naval officers aboard ships like the Pluto reveal how they were driven by non-conformist religious belief, and particularly by the rise of evangelicalism.

Some naval wives were involved with their husbands in networks of interest between anti-slavery and religious societies on one hand, and the very masculinist Royal Navy on the other. 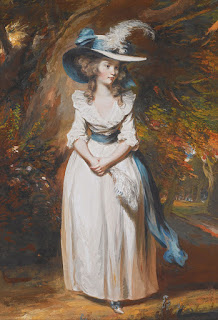 Mary Grey (pictured) and George Grey are a good example. Sir George had been immersed in Navy life since he was 14 and served in the West Indies in the 1780s and 1790s. He was younger brother of MP Sir Charles Grey. As Prime Minister Charles oversaw the abolition of slavery in the Caribbean in 1833.

Captain George Grey was married to Mary Whitbread, whose father was the brewer and anti-slavery supporter Samuel Whitbread. George and Mary were committed evangelical Christians. They counted the abolitionist MP William Wilberforce among their friends.

However, British women were also among the large number of owners of Caribbean slave-worked plantations identified in Britain in the 1830s. This is revealed by the Legacies of British Slave-ownership database: https://www.ucl.ac.uk/lbs/

Britons were absentee slave owners at the very same time as the Royal Navy was attempting to suppress the transatlantic trade in enslaved people. This contradiction demonstrates the tensions and complexities regarding anti-slavery within British society at this time.

The majority of naval officers on the West African coast were absent from home for up to three years while serving there. But others travelled to the coast with their families, particularly to the British colony of Sierra Leone.

After 1807 Sierra Leone became the centre of British anti-slave trade operations, with a community of European officials, military representatives, missionaries, and their families.

Waterloo Market, Sierra Leone. Illustrated London News, 1856.
Anne and Charlotte Columbine, the wife and daughter of Captain Edward Columbine, are examples of this. They died from yellow fever after going out to join him when he was governor of the colony in 1809-11. He resigned from his post
after they were struck down.

Columbine later died on the voyage home. He wrote in his journal that he had ‘a heart broke down with grief’.

Mrs Henry Grant Foote published her recollections of life in West Africa in 1869 (see picture of title page). She was the wife of Captain Foote, who served on the anti-slave trade squadron.

The sketch of ‘Officers of HM Brig Bonetta on board a Hulk, Sierra Leone, Africa in ‘37’ (see https://tinyurl.com/Bonetta-RMG) was likely drawn by a crew member of the Bonetta, which was used to police the slave trade.

An African woman depicted there seems, from her stance, to be a slave kept for the sexual satisfaction of British sailors or someone who sold sexual services. The hulk was probably the Conflict, which was allegedly used as a floating brothel for crews of British naval vessels visiting Sierra Leone during this period.

Sailors’ letters rarely discuss specific interactions with enslaved women encountered on captured slave ships. The interception of slave vessels was their official duty, and the emotions expressed are typically pity and compassion. 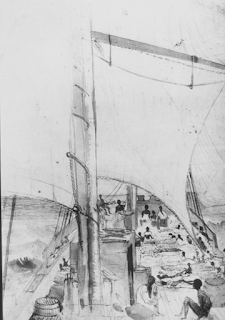 By contrast, the African women met on shore were often written about in romanticized or sexualized contexts.

This was reflective of travel or exploration writing of the time. British middle-class women were characterized by virtuousness and submissiveness while Asian and African women were often admired for their perceived exoticism.

Lieutenant Francis Meynell touched on this allure in a letter, writing to his father from the Atlantic island of St Helena in 1846, that ‘[m]any of our officers loose [sic] their hearts here’ (letter held by the National Maritime Museum). 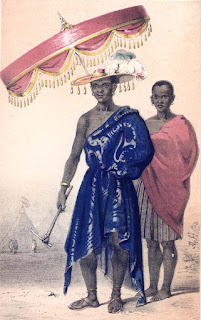 A girl was dubiously presented ‘as a wife to comfort him, & to wash his clothes & cook his meals’ Captain Luce said of his Commodore, Arthur Eardley-Wilmot.

This human gift was proffered on their mission to negotiate an end to the slave trade from the Kingdom of Dahomey (present-day Nigeria) in 1863. They’d stayed in the capital, Abomey, for many weeks.

The story of Omoba Aina, a young Egbado princess intended as a diplomatic ‘present’ for Queen Victoria from King Ghezo of Dahomey, offers evidence of a more long-lasting, familial relationship. 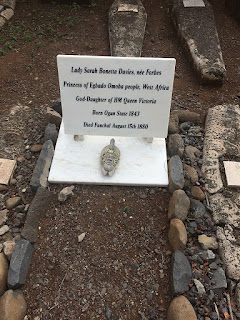 In 1850, Lieutenant Frederick Forbes brought the seven-year-old back to Britain under instructions from the King (Forbes later published his journals from the anti-slavery mission).

Sarah Forbes Bonetta (as she was later christened) lived with the Forbes family in Windsor. Queen Victoria paid for her education.

And Sarah‘s daughter was named Victoria after her godmother, the Queen: See images at https://tinyurl.com/daughter-Victoria.

It is difficult to learn more about these encounters. Were they exploitative? Did meaningful relationships develop?

Victorian notions of respectability prevented most officers from including detail. What we can ascertain is that many officers became immersed in their experiences of West African societies, even though they were briefly passing though.

Naval men away from home had a range of relationships with women of colour at a time when race was a complex issue. White women in Britain were vocal allies of the abolitionist movement but could also be slave-owners.

These are just some of the countless and complex stories of the part played by gender in Britain’s history of slavery and abolition.