I don't usually write about personal matters on this blog. But an email I've just had prompts this. 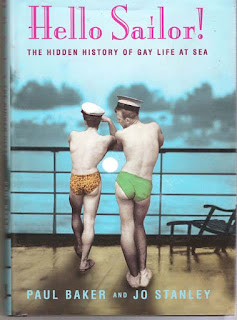 Nearly twenty years ago Paul Baker and I wrote a history of the UK Merchant Navy: Hello Sailor: The Hidden History of Gay Life at Sea  (Routledge 2003).

I thought we were recording and sharing an account of an important past culture - an extraordinary, and very enabling lifestyle for those lucky enough to be on gay-friendly ships in the 1950s, 60s and 70s.

We  interviewed ex-seafarers who were in their 60s, 70s and 80s. They were speaking about a time before Gay Pride, when homosexual acts at sea were illegal. The past!

But now an email from Captain Lee Clarke, AFRIN, a much younger person still working in maritime today, illuminates the way that the book had another use today: it has helped LGBTQI+ people in modern times feel better. Lee (pictured here) has permitted me tell that surprising story:

"When I was a cadet in the early 2000’s,and certainly a junior navigating officer in the Merchant Navy, I struggled to come to terms with my sexuality. I started to hear stories from crew members onboard the RMS St Helena, that serviced Union Castle Lines.

They talked of times when gay seafarers had their own language and culture onboard, as well as meeting in their own places all across the globe. This drew me towards Hello Sailor and I felt I connected more to the men in those pages than I did with other LGBTQ+ movements circulating at the time. 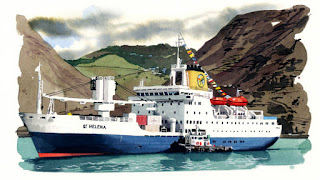 "I had honestly felt at that time that I had no heritage or understanding of the rich history that came with being a gay seafarer.

"I came across Hello Sailor in 2015 and just could not put the book down. I connected to a history I was so proud of, but also connected to the pain on land of hiding my sexuality, and the importance of being able to escape to sea.

"My ultimate favourite part of the book was learning about Polari and how people used it to communicate discreetly. I found this amazing.

"During my time as a cadet manager from 2015 to 2019,  when LGBTQ+ cadets approached me feeling disconnected about their sexuality and wondering how they would fit into the merchant navy, my first recommendation was to read Hello Sailor.

They did, and it made them proud to be in the merchant navy and to be LGBTQ+. "

I'd like to thank all the people who told us about gay life at sea, and thus enabled this story to be told, and to continue to have its effects.