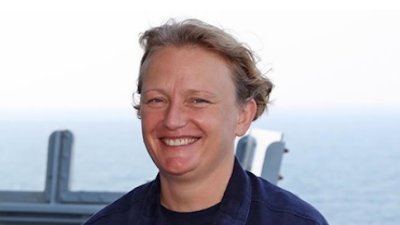 It's taken 120 years of women being in naval services. But on 26 May the Royal Navy finally appointed its first female admiral.
Commodore Jude Terry, OBE, (47) will become a rear admiral next year and the highest-ranking woman in the Navy.
Women have, of course, worked with the Navy informally and formally for centuries, including in uniform as members of the QARNNS, WRNS, and VAD. They were also in many roles such as nursing aides afloat and wives who funded their office husband's career.
But until 1991, seven years before Jude joined, women were not allowed to serve at sea. This meant that, however able, they could not attain senior positions.
The decision to appoint Jude Terry follows the  controversial culling of 'excess' admirals in 2019 (when there were 34 male admirals), as well as decades of equal opportunities efforts. She stands on the shoulders of giants. I know about those shoulders: I've been tracing the pioneers' progress.
Her current role is Deputy Director People Delivery Royal Navy, and next summer she will be fully the Director.This task involves handling 33,520 Regulars.
Of these, about a tenth are women. Since 1960 the Navy's usual number of women has been just over 3,000.
The goal is now that women will be 20 per cent of the Navy by 2030. Observers suspect that this improved ratio may be achieved by further cutbacks in male numbers.
PIONEERING FORBEARS 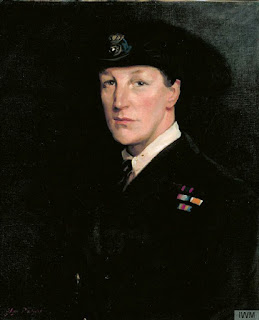 Commodore Terry's most pioneering UK predecessor was Katharine Furse, the first director of the new Women's Royal Naval Service in 1917 (pictured right).
Dame Katharine wrote in her autobiography that when she showed off her new uniform at the Admiralty:
'The First Lord ... pointed to one of my new buttons and said. "those are Admiral's Buttons, why has she got them?" The Second Sea Lord explained that the Director [WRNS] had equivalent rank for certain purposes and therefore ought to wear the buttons... they were approved.'
Women were civilians in very separate naval services. Some naval men had trouble seeing their value and respecting their authority.
Initially women were permitted to wear dashing tricorne hats. But when it came to insignia they were only allowed blue braid, not gold, because gold was 'definitely the prerogative of the men' and would be 'wasted' on women.

Today such discrimination would be unthinkable. Jude Terry will be working in a changing culture.
Making women leave on marriage, or when pregnant, is a thing of the  past. Earlier than the 1990s Wrens and QARNNS became activists and took the MOD to court for discriminatory behaviour.
Women also fought for the right NOT to go to sea: see CPO Jacqueline Cartner' s 2012 struggle (pictured, left). More recently women pressed for combatant statues. 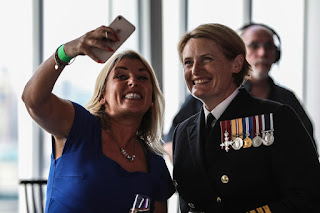 The Naval Servicewomen's Network, which Captain Ellie Ablett (pictured right, in uniform) founded in 2013 helped women work collectively for a fairer deal, including access non-traditional roles.
At that time no-one would bet on when a woman would finally become an admiral.
FINDING OUT MORE
~ If you want to know about Commodore Terry the best place to start is a Youtube interview with her made by students at Barnhill Community High School in 2020. They interviewed her for 20 minutes and she was frank. See Captain Terry Interview https://youtu.be/XSspBCcT0cI. 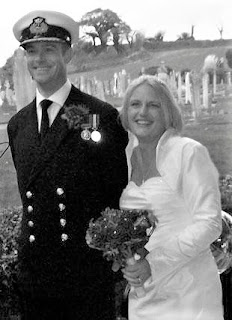 In it she said she had 'always been a tomboy' and was 'fiery.'  (However, she married in 2009. See picture of her wedding to a Merchant Navy pilot, Captain Noel Charlton. He's on LinkedIn at https://www.linkedin.com/in/noel-charlton-55982556/?originalSubdomain=uk).
She spoke of her father being in the RN, and her mother's initial opposition to Jude joining.
Asked about role models Jude named three men: Nelson Mandela; a really good RN commanding officer Richard (inaudible); plus the inspirational General David Hancock.
~You may also like to look at social media. Jude Terry tweets at https://twitter.com/judeterry9.
~ On LinkedIn she can be found at https://www.linkedin.com/in/jude-terry-29723a53
~ And for the fullest details, free of pay walls, see the article below. I have lifted from the website of the Association of Wrens and Women of the Royal Naval Services:https://wrens.org.uk/2021/05/26/royal-navy-appoints-first-female-admiral/. 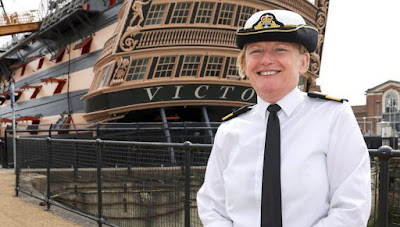 "For the first time in the centuries-long history of the Royal Navy, a woman officer will be appointed to the rank of admiral.
"Commodore Jude Terry, who has served her nation and Navy for nearly a quarter of a century, has been selected for promotion to rear admiral – making her the most senior woman in the Royal Navy, past or present.
"She will be responsible for sailors and Royal Marines from the moment they are recruited to their final day in Service – spanning their entire careers by overseeing training, welfare and career management.
MAKING HISTORY
"The 47-year-old from Jersey will be promoted to rear admiral next year and take over as the Royal Navy’s Director of People and Training and Naval Secretary. Of making history she says simply “someone has to be first”.
"She continued: “I have always thought of myself as a naval officer first, then a logistics officer, then Jude and finally as a female. The Navy genuinely doesn’t look at your gender and is an equal opportunities employer – it wants you to be part of a team and deliver outputs to support operations.
"“I have been really lucky throughout my career. I’ve enjoyed great jobs, wonderful support from my family, worked with great people, seized the opportunity to see the world and contribute to a number of operations which have made a difference to people’s lives including Afghanistan, Somalia and Sierra Leone to name a few.”
"She currently serves as deputy director of the department she is earmarked to take over, with the goal of helping to shape the Royal Navy and its people up to 2040. 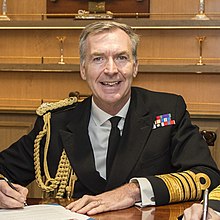 "First Sea Lord Admiral Tony Radakin [pic left] said: “I am delighted with Commodore Jude Terry’s selection for promotion to Rear Admiral. Jude is part of a cohort of trailblazers in the Royal Navy who have seized the opportunities on offer, and risen to the top.
"This builds on a rich career of naval and broader Defence appointments, all of which she has excelled at.”
"Commodore Terry hails from a naval family and joined the Navy in 1997.
"She has spent the bulk of her seagoing career in Plymouth-based warships, including survey vessel HMS Scott and two spells with helicopter carrier HMS Ocean.
HMS OCEAN
"Of her 12-month second draft to HMS Ocean she spent ten away from the UK in the Baltic and Gulf and was responsible for working with a documentary team producing the series Warship for Channel 4.

"Her career has taken her to the Gulf and Middle East, Indian Ocean, Far East and the Caribbean.
"Numerous staff appointments have included the Royal Navy’s logistics branch manager, dealing with issues as varied as recruiting and training, retaining experienced personnel, ensuring ships and submarines have enough chefs, review of tattoo policy, and a review of welfare provision across the service. 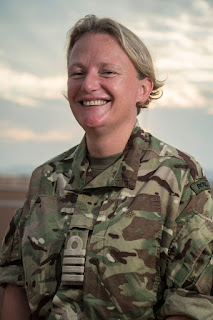 "And Commodore Terry was awarded the OBE in the New Year’s Honours List in 2017 for her efforts during three years at the UK military’s operational hub, Permanent Joint Headquarters, during which she was involved in:
# the end of Britain’s front-line operations in Afghanistan
#  overseeing the closure of bases at Lashkar Gar, Bastion and Kandahar
# the successful efforts to curb the spread of the Ebola virus in West Africa in 2014 – 2015.
HOME IN JERSEY
"Away from the Royal Navy, Commodore Terry still lives in Jersey, enjoys its shoreline, outdoor activities and water sports ... as well as travelling, reading, good food and good weather."
Posted by Dr Jo Stanley, FRHistS. at 09:45