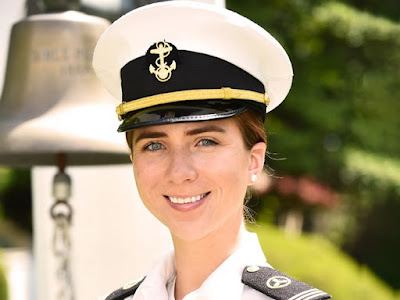 Please celebrate and mourn with me today. There are two inspiring things relating to whistle-blowing officer cadet Hope Hicks, the most famous maritime rape survivor:

1.  this afternoon she graduates from the US Merchant Marine Academy (USMMA), despite her ordeal.

2. this week she waived anonymity for the first time. Up until Tuesday she'd only been known only as Midshipman-X and not seen in any photograph.

Hope has not enjoyed a simple training period.  The then-19-year- old's revelation that an engineer raped her in 2019 went viral. The appalling story of drunkenss and shipmates'  complicity led to hundreds more disclosures by women and men, and to much discussion by policy-makers.

Hope's brave honesty has created the most productive furore yet in the history of battling to end sexual abuse at sea.

Ahead of her is a future as an officer with the US Navy -- and soon her well-supported New York court proceedings against Maersk Line Ltd.

'“Speaking up against a powerful corporation is intimidating, which is why, up to this point, Hope has declined to reveal her identity, opting instead to go by the moniker Midshipman-X,” said Christine Dunn, Partner at Sanford Heisler Sharp and counsel for plaintiffs  [14 June].

“But, today, Hope is publicly identifying herself in an effort to seek justice for the sexual assault and harassment that she, and others – like Midshipman-Y, endured aboard Maersk vessels.”' 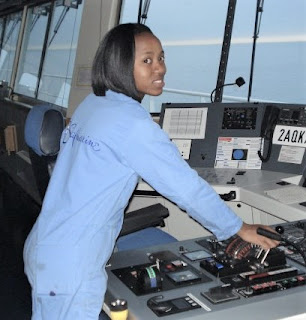 She didn't survive to campaign in court and on social media.

Both women are crucial figures in this struggle for safety at sea.

Akhona was drowned off Croatia on 24 June 2010, twelve years ago next Friday. Both she and Hope were only 19 at the time that these alleged and separate-but-related incidents shifted the courses of their lives forever.

Did Akhona jump (to avoid the imminent showdown with her alleged rapist) or was she pushed (to shut her up?) And was she lying? And was sexual misconduct really not a problem at all on Safmarine ships?

Those are still the telling questions being asked. Akhona made headlines, briefly, before #MeToo took off.

Her case has yet to bring the staggering amount of useful publicity and the attempts at legal redress that Hope's situation continues to generate. 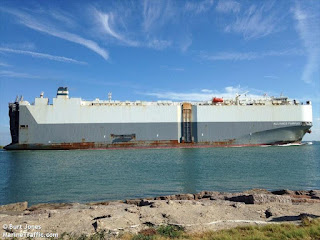 Plus ca change? One of Hope's colleagues, Midshipman Y, is joining in filing a civil lawsuit against Maersk. In 2020 she was on the same ship,  M/V Alliance Fairfax, (pictured) just after Hope.

"According to the complaint, Midshipman-Y was so severely sexually harassed aboard a Maersk ship during her Sea Year that she slept clutching a knife for protection.

"Midshipman-Y’s complaint alleges that she experienced extreme sexual harassment, unwanted touching and discrimination while on board the same Maersk vessel two years later.

"... Midshipman-Y was severely sexually harassed by a crewmember who was known to other Maersk officers and crewmembers as being violent. Although crewmembers and officers were allegedly aware of the harassment, no one intervened or reported the misconduct.

"The complaint further alleges that Midshipman-Y was treated less favorably than male crewmembers on account of her gender.

"Driven to desperation, at the first opportunity, Midshipman-Y begged USMMA representatives to get her off the ship prior to the completion of her required sea time.

"As a result, Midshipman-Y is unsure if she will ever be emotionally capable of completing the USMMA."

Will Alliance Fairfax go down in history as a Ship of Shame; The Ro-ro That Put  Rape Culture on the Map of Infamies; or as The Final Frontier for Sexual Abuse at Sea?

Read about Hope's latest steps at:

Hope celebrated her 22nd birthday last Tuesday, the day that she inspiringly went even more public.

Akhona didn't get to be that old, nor that publicly courageous. And she died just a fortnight before she was about to celebrate her graduation day.

But Akhona can posthumously inspire others to speak out.

As a veteran historian of so many seafarers who've suffered discrimination I feel  sad and angered. All young seafarers deserve to celebrate their birthdays, to feel pride as they pass out into graduate life, and to enjoy long careers free from harassment and assault. Don't they?