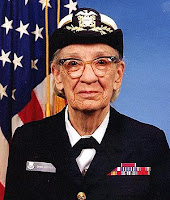 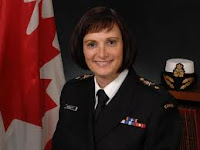 Women admirals are rare, so it's a big number that Commodore Robyn Walker (top picture) has just been appointed to the rank of Rear Admiral in the Royal Australian Navy.

The Australian MOD press release says 'Admiral Walker is the first female in the Navy to attain the rank of Rear Admiral and to take on the job of Surgeon‑General for the Australian Defence Force.'

Not that she's doing a Nelson in high-profile naval battles at sea. 'Admiral Walker’s promotion follows her achievements as Director-General of Health for the Navy with broader responsibilities to the ADF [Australian Defence Force] in leading a $270 million revamp of the ADF’s health capability, and her previous roles in supporting the health of operational Defence personnel in Iraq and East Timor.

'Admiral Walker said she was honoured and humbled by her promotion.“I am looking forward to the challenges that I will face and continuing to make a positive difference in my new role.”

'Admiral Walker joined the Royal Australian Navy from Brisbane as a Direct Entry Lieutenant in 1991, and has continued to work in the field of medicine ever since.

'She served in HMA Ship Westralia and with the Sea Training Group, and has been involved in the planning of health support for several military operations.

'Admiral Walker led the health planning and assembly for Australia’s military medical response to the 2004 Boxing Day Tsunami, and led further developments to the Australian Defence Force’s Mental Health Strategy between 2005 and 2008. In September this year, she was named Telstra ACT Business Woman of the Year for 2011.'