Submariners - women too, at last 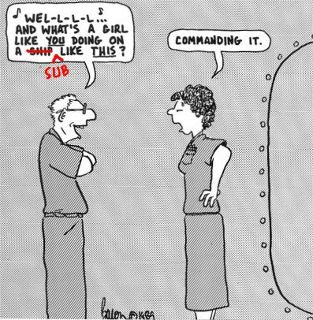 Well, the possibility of women becoming submariners on UK boats has been building up - as previous posts on this blog have said. Today, after an 18-month review, the go-ahead has been confirmed by Defence Secretary Philip Hammond.

The news has just been announced. It's going to be officers first, then ratings - perhaps because men see women officers as less harass-able. These officers will begin serving on the four large Vanguard-class nuclear subs in late 2013.

Then female ratings will be allowed to sail in 2015. By that point, it's thought women will also be serving on the new Astute-class subs.

It's an overdue move. Lots of silly excuses have been proffered in the past, like:
# nuclear subs can harm your unborn foetus
# pregnant women will compromise missions because if something goes wrong (like an ectopic pregnancy) the sub would have to surface and get the patient to land
# they'll commit adultery with men on board, and wrecking naval marriages
# hot-bedding will cause immorality.

The main problem, I'm told by submariners I know, is actually toilets. It costs a lot to adapt vessels to create separate facilities for women and men - and separation is seen as crucial.

And the main reason for allowing women on subs now is - as so often in wartime - that there aren't enough men to do the isolated work. It's not that there's a better commitment to equal opps.

Having said that, most women at sea think the Royal Navy is far more egalitarian than the Merchant Navy. It has excellent policies prohibiting sexual harassment, that are well enforced.

Nick Hopkins in The Guardian wrote that
'The Conservative MP Andrew Murrison, who served as a surgeon commander in the Royal Navy before entering parliament, said: "Women have proved to be an essential part of the surface fleet.

'"I can see no convincing reason to prevent female personnel from becoming submariners if they wish. The medical and physiological objections to women serving in submarines appear to have been resolved removing any real hurdle for potential female submariners."

'Women have been serving on Royal Navy surface ships since 1990 and there are now more than 3,400 female personnel in the fleet, though this accounts for less than 10% of the total. Some jobs in the navy are still men-only, including joining the Royal Marines.

'But more than 70 per cent of jobs in the navy and army are now open to women. In the Royal Air Force, the figure is 95 per cent.'
http://www.guardian.co.uk/uk/2011/dec/08/royal-navy-women-submarines?newsfeed=true

Researching women on the wartime seas - as I am for my next book - I am struck by how often women had to fight to be allowed to take part in sea work - and what flimsy excuses have been made to halt them.

On Aug 7 1940 MP Seymour Cocks suggested women should be accountants at sea in the Royal Navy. But the admiralty refused as it would cause problems organising relief staff. Where there is a will - or shortages of personnel- there is a way.
Posted by Dr Jo Stanley, FRHistS. at 09:25