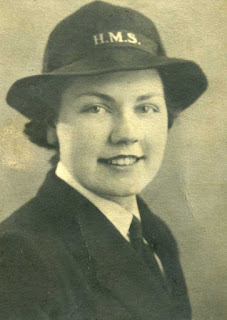 WW2 image of servicewomen are usually positive. They're 'our girls', working for 'our victory'. But now a story emerges of a Wren in uniform whom a mystery assailant shot four times as she was returning from an errand. She died.

The question is, was this a crime motivated by hostility to Wrens, to women, this particular woman, or was it just random? A crime of passion? Or politics? Or just a fluke? But let's bear in mind that more men murder and assault women than women murder men. So the bigger question is: does the murder expose a gendered hostility to servicewomen that has silenced?

Twenty-year-old Gertrude Canning, of Donegal, was a serving Wren (Woman’s Royal Naval Service) at Camp Quebec at No. 1 Combined Training Centre in Inveraray, Argyll, when she was murdered by four shots in 1942.

It's reported that 'Scotland's newly-formed Cold Case Unit could reopen an investigation into the murder...The Crown Office has listed the death... as part of the Unsolved Homicide Database, the result of which may see her case re-examined. A total of around 93 serious crimes are subject to a re-investigation due to advances in forensic technology.'