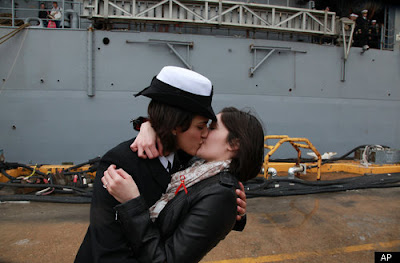 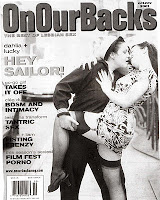 Yesterday two women kissed in what may become the most iconic real embrace in women's maritime history. It's been downplayed, it wasn't a show, but it's been photographed for posterity and shared with the world by Associated Press. You can even see it on video.

This real kiss compares interestingly to a spoof one posed by models ten years ago. It's a pastiche of the famous V-J Day 1945 kiss shot by Alfred Eisenstaedt (see this blog, 15.2.2010). To me a decade ago the embrace felt very very far from what could happen in reality. Now it's not.

And that progress merits celebration. I can see why the US navy is downplaying it. There must be anxiety that it shouldn't be fetishised or trivialised. And certainly human beings' right to embrace should indeed be taken for granted. But actually this a significant and serious step forward.

Journalist Brock Vergakis reports that 'A Navy tradition caught up with the repeal of the U.S. military's "don't ask, don't tell" rule on Wednesday [Dec 21] when two women sailors became the first to share the coveted "first kiss" on the pier after one of them returned from 80 days at sea.

'For the historical significance of the kiss, there was little to differentiate it from countless others when a Navy ship pulls into its home port following a deployment. Neither the Navy nor the couple tried to draw attention to what was happening and many onlookers waiting for their loved ones to come off the ship were busy talking among themselves.

'David Bauer, the commanding officer of the USS Oak Hill, said that Gaeta and Snell's kiss would largely be a non-event and the crew's reaction upon learning who was selected to have the first kiss was positive.

'"It's going to happen and the crew's going to enjoy it. We're going to move on and it won't overshadow the great things that this crew has accomplished over the past three months," Bauer said.

'The ship returned to Joint Expeditionary Base Little Creek-Fort Story following an 80-day deployment to Central America. The crew of more than 300 participated in exercises involving the militaries of Honduras, Guatemala Colombia and Panama as part of Amphibious-Southern Partnership Station 2012.

'Both women are Navy fire controlmen[sic], who maintain and operate weapons systems on ships. They met at training school where they were roommates and have been dating for two years, which they said was difficult under "don't ask, don't tell."

"We did have to hide it a lot in the beginning," Snell said. "A lot of people were not always supportive of it in the beginning, but we can finally be honest about who we are in our relationship, so I'm happy."

'Navy officials said it was the first time on record that a same-sex couple was chosen to kiss first upon a ship's return. Sailors and their loved ones bought $1 raffle tickets for the opportunity. Gaeta said she bought $50 of tickets, a figure that she said pales in comparison to amounts that some other sailors and their loved ones had bought. The money was used to host a Christmas party for the children of sailors.'