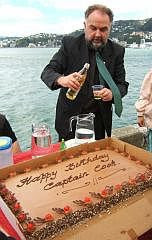 Women on whalers, pioneering female captains, ‘piratesses’ and ‘seagals’ (women who hang around wharves because they like the romantic associations with ships). These were just some of the topics Ken Scadden drew together when he set out in December 1993 to organise the world’s first conference on women and the sea.
I remember Captain Sally Fodie, Joan Druett (pictured), Jan Jordan and women from the now defunct NZ Women’s Maritime Network, which had begun in order to support women getting seafaring jobs.

He gathered us all together in his capacity of Curator of the Wellington Maritime Museum, New Zealand (and later Director of the ensuing Museum of Wellington City and Sea.)
International networking on gendered maritime history, was, I think, initiated by these two days, involving a hundred-odd women. Ken was probably the main man in the world to give this to the field maritime historiography. He was a key enabler of that first wave of women historians writing about women seafarers.


What effect has his conference had?
~ It began informal connecting in our world, not least helped by the advent a little later of something more affordable than airmail stamps: email.
~ At least two of us are still writing about the subject: Joan Druett and me. Jan Jordan is teaching criminology. Sally Fodie has given up ferry work but is a facebook friend.
~ From my perspective it seems that it was there that we started to feel we were making a coherent and valuable new sub-discipline, women’s maritime history – and that it would be fun, and respect-worthy and welcome.

Ken personally
He was a very open and big character, a rock n’roller and a mensch. But as the picture shows, he knew when to wear a tie – flashily. Maritime museum trustees can be traditionalists and he knew very well how to handle them – and handle fund givers. For example, he gained British Council funding to fund my fares, as the keynote speaker.

He supported us women because he supported equal rights for all human beings, including BAME people and LGBTQI* people.

Ken died, aged 64, on 17 Oct. His send-off is tomorrow.He leaves a partner, Wendy, his ex-wife Kristina and two sons.

My memories
I have two clusters of memories of him. One is the way he took me out on blustery walk of old goldfields with a gang of labour historians, to blow away my jetlag. That vigorousness was so enjoyable, and normal, for him, and very infectious.

Their other is that a few years later when he came to the UK on a maritime museum tour I was his ADC. It certainly was fun, especially a New Forest picnic with maritime oral historian Sheila Jemima.

So I hate it that cancer got him, though I admired the way he got on boisterous terms with the encroaching Grim Reaper.

Tributes can be left at http://www.tributes.co.nz/ViewMyTribute.aspx?id=11883