When “Jack Tar” met “Tommy Atkins”: Black Men Serving as Both Sailors and Soldiers during the Napoleonic Wars


“Jack Tar” was the name given by the public to sailors of the Royal Navy and merchant service. “Tommy Atkins” was the generic name given to British soldiers.

During the Revolutionary and Napoleonic Wars (1793-1815) neither “Jack” nor “Tommy” were homogenously white. At least one per cent of Royal Navy personnel were from countries with black populations. This amounted to 188 out of the total 18,000.

A black Jack Tar appears prominently in several paintings of the death of Nelson at Trafalgar in 1805, most notably that painted by Daniel Maclise. Pictured: detail from his Death of Nelson, (1859-1864) . 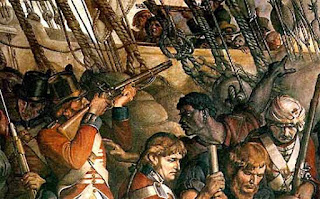 On Nelson’s Column in London (1843) a bas relief shows a black sailor. (Pictured below.)

Some of these images were shown in the exhibition Black Sailor's in Nelson's Navy, at the Old Royal Naval College, Greenwich, 2005: https://www.independent.co.uk/news/uk/this-britain/the-black-heroes-of-trafalgar-320576.html

Representations like this were, to some extent, British retrospective claims for moral authority over Napoleonic France (and the USA). These countries had a poorer record on opposing slavery than did Britain.

However, the inclusion of black figures was not an “artistic device” or “political correctness gone mad”. They were historically accurate inclusions of figures that the British public were familiar with. 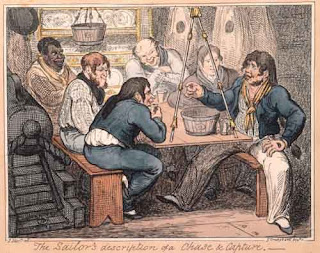 Pictured: A black sailor (far left) listens as part of the team in this mess gossip session about warfare: "The sailor's description of a chase and capture", George Cruikshank, 1822.

OVERVIEW OF BLACK SERVICE PERSONNEL IN THE BRITISH FORCES 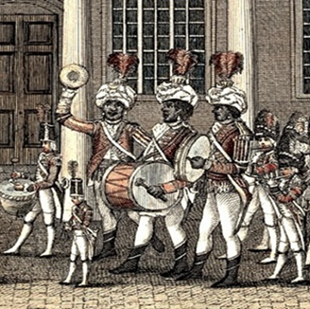 A few served as ordinary soldiers, rather than musicians, but not in British-raised regiments. The distinction between Crown and Colonial forces was clear. If you were in a Colonial regiment you would have a greater range of possible roles than just musician.

Black soldiers, sailors and marines fought, were wounded and died alongside their white peers during the American War of Independence, the Napoleonic Wars (a number fought at Waterloo in 1815), and in numerous “small wars” until the 1840s.

Most black recruits in British regiments enlisting in England came from the Caribbean, the United States, Canada and Africa. Others came from the East Indies.

The majority enlisted in London or Southern England, or in ports such as Bristol, Liverpool and Plymouth. 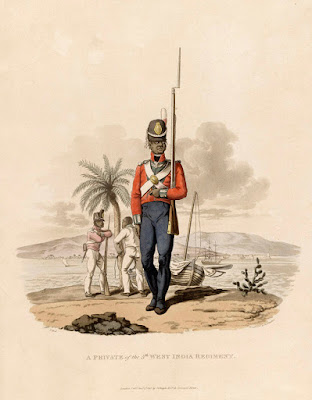 Some regiments were raised in the Caribbean and the black personnel felt proud of being so distinct from enslaved people. See the proud body language in this "Private of the West India Regiment", 1812. National Army Museum, https://www.nam.ac.uk/explore/slaves-red-coats-west-india-regiment


Few of the black men who enlisted in Army regiments had nautical occupations. It might be that individuals with any discernible maritime experience, skill or related occupation preferred to join either the Royal Navy or merchant service.

Nevertheless, several black Royal Navy sailors and one former Royal Marine did serve in British regiments. This was usually after they had been at sea, not before.

This article seeks to draw attention to their presence using findings from pension records.

Service in the Royal Navy was frequently temporary, as in the merchant fleet. By contrast enlistment in the Army was usually “for life”. This, and the opportunity to put down roots and raise a family, probably made the Army more attractive than naval life for some:

~~ William Prince, a labourer born in 1804 on the Isle of Providence in the West Indies, served in the Royal Navy between May 1824 and August 1825. (Initially on HMS Serapis and then on HMS Primrose).
He joined the Grenadier Guards in London in December 1825, where he was described as having a black complexion. Prince was 5’10” tall, making him a natural choice for ceremonial duties. As a guardsman in peace-time he would have expected to spend his service in London. (See a copy of his death certificate, below) 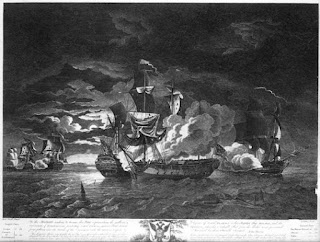 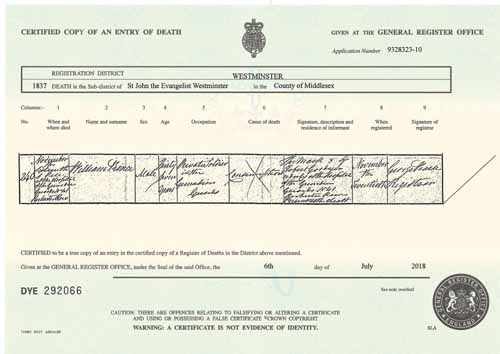 Royal Navy service counted towards pension, and black soldiers made sure that it counted: 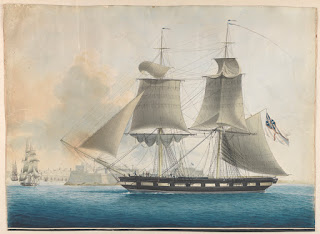 Collins went on to serve in three regiments between 1811 and 1823, (the Grenadier Guards, 23rd Lancers and the 10th Hussars) and was described as having a black complexion. He was discharged from the 10th Hussars as a Private on a pension in March 1823, with 19 years service on his record. 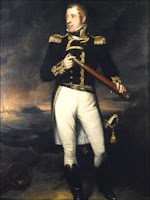 Many sailors were redundant after the Napoleonic Wars ended in November 1815. Probably it was seen as appropriate to retain white sailors - "us" - in preference to black personnel, however loyal and valiant they had been. Some went into the Army, when they saw the writing on the wall.

Brookings enlisted in the 40th (2nd Somersetshire) Foot in Taunton, Somerset in August 1815.As a drummer he went to France, Australia and the East Indies. He was discharged on a pension in May 1833, having served for 23 years.

“A BAND OF BROTHERS” OR COLD ECONOMIC REALITY?

“Race” may have been a factor in establishing relationships between black servicemen. Some encouraged their pals to join up. They supported each other while in service.

However, the poor unemployment prospects in Civvy Street, in bleak winters, was probably a more persuasive recruiter:

~~ John Freeman of Barbados served as a Private in the Plymouth Division of the Royal Marines from January 1800 to December 1815.

In January 1816, only two days after leaving the Royal Marines, he was enlisted into the 43rd (Monmouthshire) Foot, still in Plymouth, one of Britain’s three major naval ports.
On enlistment Freeman was described as 31 years old, a labourer and a mulatto. He was introduced into the army by Private William Davis.

~~ William Davis was born in Boston, USA, a "labourer" with a "black complexion"). He had enlisted in the 43rd in Colchester in 1809 aged 21 years. It’s not known how or why Davis came to Essex from America; certainly he was not a servant and did not have a nautical occupation.

COMPARING THIS TO RACE IN THE SERVICES TODAY

As late as the twentieth century the RN took fewer black people than did the merchant fleet. The Army was the most inclusive service. Few people - of any colour - switched between Army and Royal Navy jobs.

In 2017 the Royal Navy/Royal Marines Black and Minority Ethnic (BAME) personnel were at 3.6 percent. In the Army it was 11 per cent. (https://www.gov.uk/government/statistics/uk-armed-forces-biannual-diversity-statistics-2017)

Black personnel are still under-represented as officers. BAME people are just 2.4 per cent of all armed forces officers. In the Napoleonic Wars they were not allowed to be officers at all.

Women and men are now actively recruited in the Caribbean. The Services pride themselves on embracing diversity. The Army launched a BAME support network in 2017, which it is hoped will improve status equality: https://www.forces.net/news/army-launches-new-network-black-asian-and-minority-ethnic-soldiers

This piece originated in my talk entitled “Soldiers of African origin in British Army Regiments in England and Yorkshire, 1700s to 1840s”, given at What's Happening in Black British History? VIII conference, (University of Huddersfield, May 2018).

The initial research for this study is from my MA thesis: Ellis, JD. “The visual representation, role and origin of Black soldiers in British Army regiments during the early nineteenth century.” (Unpublished MA thesis, University of Nottingham, 2000).

Most of the sources used are from the National Archives (TNA). Most can be found online at www.nationalarchives.gov.uk or are accessible via www.ancestry.co.uk or www.findmypast.co.uk