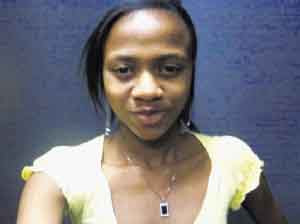 This week South African media are reporting the tragic death of Akhona Geveza, a nineteen-year-old South African woman cadet on a cargo ship.

Clever, beautiful and set for a career at sea, she disappeared from the British-registered Safmarine Kariba on June 24. Her poor body was found drifting in the sea off the Croatian coast three days later.

Was she killed by shipmates? Did she kill herself?

Either way,the key seems to be that the day she died a fellow cadet reported (on Akhona's behalf, and against her wishes) that a senior officer, had repeatedly raped her.

Cadet Nokulunga Cele stated that Geveza had said that the Ukrainian officer first tried to kiss her while he was teaching her to swim early in May. Later he apologised to her and called her to his room. But there he allegedly raped her.

Cele said Geveza was not willing to report the matter to the shipmaster because she feared that nobody would believe her. What a lonely, terrible, situation. What an indictment of the shipboard regime.

There is no way that people trying to do their job should ever, ever, be allowed to be abused. It is especially outrageous when the victim is young and at sea because of economic need. (Akhona's father John Geveza, said the career of his only child had represented hope for her unemployed parents in the Eastern Cape).

It is even worse again when their abuser has additional social power over them - such as the ability to enable promotion, or even just daily wellbeing.

Akhona Geveza was a cadet on the Transnet National Port Authority’s maritime studies programme. It was set up as part of a campaign to encourage young women to become seafarers.

But the few stories leaking out so far suggest just how much the merchant shipping industry still has to learn about respecting and supporting vulnerable women - and young men - at sea. More than encouragement is needed. A decent working situation, free from violence, is crucial.

Geveza’s fellow cadets subsequently revealed that there was systematic abuse of power by senior officers at sea “who threatened cadets’ careers if they did not perform sexual acts” reported the South Africa Sunday Times. A woman had to have two abortions, after being raped at sea. Two male cadets were raped by senior officials.

At 10am on June 24 Shipmaster Klaudiusz Kolodziejczyk heard about the rape. He says he immediately confronted the officer and convened a conference with him and Geveza for 11am.

When she failed to arrive for the meeting,he organised a search. Kolodziejczyk, alerted by some pills and a bottle of thinners found on the forecastle of the ship, sounded the alarm and called Sea Rescue at Rijeka.

Captain Kolodziejczyk was no doubt well-intentioned in organising the three-way conference But really! It's insane to subject a victim to that, especially when she was to work with that officer for a long period in an enclosed institution far out at sea. Doesn't Kolodziejczyk know how bullying and social pressure work?

Not only would the rest of her voyage be torture. It's also wrong to treat a rape as a personal dispute between two parties. Rape is a crime. Doesn't officer training include basic procedural advice about how to support the victim? Even the newest police officer ashore knows how traumatising a confrontation could be.

The very least that should be done by Transnet is ensure that this can never again happen on any ship. Akhona's death should alert all masters and shipowners to the very drastic need for training. All ships should be respectful workplaces, where, if there are any such crimes, they are dealt with appropriately.
Posted by Dr Jo Stanley, FRHistS. at 02:38