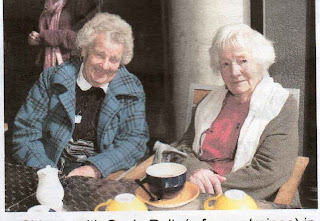 At the moment I am writing the section in my book that includes the middle-class women trained to work on canals in WW2. So it was great to have a very canal-y weekend in Oxfordshire.

I walked along some of the routes the women had taken, like the locks at Fenny Stratford on the Grand Union Canal. It made me realise just how very cut off from war the women were, and therefore how extra tricky it was for them to manage their relationships with the traditional boater community.

At Banbury I saw Kate Saffin's two one-woman plays about women on canals. She staged them at Tooley's boatyard. Ironically the auditorium was the dry dock, where her boat has been fixed at least three times.

Isobel's War is based on accounts of the women who joined the Women's Training Scheme during the war and worked on the narrow boats, a kind of counterpart to the land girls.

The other play is Mary Rose, the poignant story of two sex industry workers who briefly set up a brothel on an old landing craft. Moored on a deserted arm of the Oxford canal near Wolvercote, they encounter a range of responses from the locals, not all of whom are queuing up on the towpath for their services.

Kate based it on a short factual memoir: 'A signalman's story' by Hedley Hunnisett, in Driving Wheels, number 44 (Autumn 2002)

You can see the double bill on this Saturday, July 24, at Kizzie's, Lower Heyford (also on the Oxford canal, bridge 206). Go to www.alarumtheatre.co.uk for more info.

You can also learn more about women in the traditional boater community by reading Wendy Freer, Women and children of the cut, and Sheila Stewart, Ramlin Rose: The Boatwomen’s story.
Posted by Dr Jo Stanley, FRHistS. at 11:06

I have just started as a volunteer for Dudley Cnal and Tunnel Trust. My role is to be as an Oral History Volunteer. My personal interest is in the women who worked on the canals in the second world war.

My remit is to find and interview people who worked on the canal, make a recording of the interview and make a transcript.

My questions to you are where do I find people, are there many left ?. Is there an association for women who worked on the boats during the war ?

Any help or clues you can offer would be much appreciated.