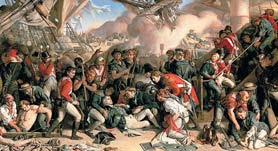 Through my Google Alerts system I've found an interesting web forum, with a subsection about women on sailing ships. Go to http://forum.sailingnavies.com, then go to 'Women at sea.' The site was mainly active 2003-2008, but it's still viable.

Some of the women discussed are cross-dressing sailors, some are wives of officers, two are mothers who gave birth at sea while their husbands were in Nelson's navy; Nelly Giles on HMS Bellerophon at the Battle of the Nile, 1798, and Louisa Phelan on HMS Swallow in June 1812.

They may have known the two women whom Thomas Maclise represented in his 1860s painting, The Death of Nelson. I was looking at it in Liverpool's Walker Art Gallery last week.

I noticed that of the three 'nurses', the central one is a man. But he's looking very tender. I wondered if the artist gave some thought as to how prominent a woman should be - and decided against it.

The Walker website has an interesting article about how Maclise based his painting on real details of the Victory's complement in 1805. "The inclusion of two black people in the scene - a seaman in the centre of the painting and a cook to the left - was in part a matter of historical accuracy. The Victory's master book of 1805 refers to a small number of foreigners amongst crew members and mentioned that "some must have been Negroes � Two give Africa as their birthplace".

The black seaman plays a key role in the painting not just because he is in the centre, but because he points to Lord Nelson's assassin as well. The black seaman is not a symbol of "otherness" or difference of identity and culture; rather his presence serves to strengthen British identity.

Like other historical paintings, "The Death of Nelson" not only commemorates an important event, but also fulfils a didactic purpose: the representation of black people and women together with Lord Nelson suggests that Victorian society was a harmonious whole, despite its class divisions and inequalities.

In reality 19th century black sailors in British fleets were poorly treated. Although they usually worked in the lower ranks of the ship's company as cooks, deck hands or stewards, they were not slaves but free sailors. The hardship of living at sea meant that the life of a sailor was less attractive and for this reason black people were easily accepted.

It is believed that towards the end of the 19th century a quarter of all seamen in the merchant navy were black. Black people at sea were not isolated by their white shipmates, but mixed both in work and in leisure time. Black seamen from West Africa, the West Indies and the United States were a particularly common sight in Liverpool."
http://www.liverpoolmuseums.org.uk/picture-of-month/displaypicture.asp?venue=2&id=37
Posted by Dr Jo Stanley, FRHistS. at 00:18