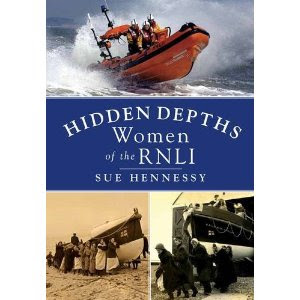 Struggling to write my book on women on the wartime seas, this week I've been investigating lifeboat women.

It's been fascinating to find out that war didn't change the tradition that women helped launch the boats (before sea tractors did the hauling) but they didn't crew them. Exclusion continued.

Probably the main reason they didn’t sail was superstition. The ages-old defensive belief that women at sea brought ill-luck was so strongly entrenched that women could or would not challenge it. They either respected brave men’s convictions or had a sense of impossibility; there were better things to spend your energy on.

Newbiggin by the Sea have a great website about their launchers. http://www.newbigginbythesea.co.uk/lifeboat/history.htm. And its historian, Richard Martin, is a godsend for explorers like me.

One of the Newbiggin launchers, cleaner Bella Arkle, said of a 1927 launch:

‘Rain speared down from black skies, a howling freezing gale tore at the roots of the fishermen’s cottages by the shoreline, a boiling sea was thundering ashore with huge combers breaking over the rocks in a fury of spume…

when the alarm went off I ran to the Lifeboat house where all the women were gathering. The weather had really turned bad when the Lifeboat was brought out and got into the water but waves threw it back. We had to straighten her up by wading right in. I was up to my neck that day, but we managed to get the boat away

… all the fishing boats were brought back safely. In fact the boat was out for three hours and the Newbiggin womenfolk for the most part waited on the foreshore in their wet clothes, facing into the gale, to help haul the Lifeboat in. That… was tradition.'


I really appreciate the help of Sue Hennessy in helping me understand their situation. In October she is bringing out a book about women's contribution to the Royal National Lifeboat Institution, published by the History Press, Stroud. (see pic).
Posted by Dr Jo Stanley, FRHistS. at 22:58