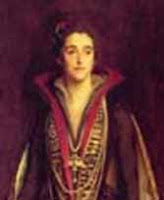 Was the initial idea of having ‘a women's navy’ the initiative of a smart feminist – or a pragmatic move by a chap who had no other choice?

At her talk at the British Commission for Maritime History Seminar at Kings College, London, on Thursday Oct 27 Ph.D researcher Hannah Roberts has shed new light on that pivotal moment in the Women’s Royal Naval Service History.

Up till then most people had accepted the story that in March 1917 the enterprising Lady Rocksavage, Sybil Cholmondeley (pic, left), was giving drinks to Sir Eric Geddes, the First Lord of the Admiralty (pic, right). He was worrying about the Navy’s shortage of people (well, men). So many sailors were dead or injured.

‘Why don’t you use women for shore jobs such as driving and typing? The Army does, who not the Navy?’ she asked. Although he was shocked, the idea went ahead, quickly. By November it was agreed: 3,000 service women were to be recruited for this new auxiliary service, the WRNS.

That’s the founding myth – which was surely enjoyed by the suffragette directors of Wrens, Katharine Furse in WW1 and Vera Laughton Mathews in WW2.

But in looking at Geddes’ records Hannah Roberts has found that as early as 1915 he was recognising that the war could only be won if women were recruited to do the work of men who were away fighting. His can-do approach - as Director-General of Munition Supply 1915-16, Director of Transportation on staff of C-in-C British Army in France 1916-17,and Director-General of Transportation for all theatres of war 1916-17 - meant he recognised economic necessity. His views on women's emancipation were not the point.

In that case, Lady Rocksavage would have been preaching to the long-converted when she buttonholed him over gin two years later. I like to see myths demolished, but I’m rather sad to see this sparky one go.

NB: The King’s seminars open to the public, and take place on Thursdays at 5.15pm. They are held in the Meeting Room of the Department of War Studies, 6th Floor, Old Main Building. The British Commission for Maritime History seminars are organised by Professor John Armstrong and Dr Alan James and are supported by the Department of War Studies, King’s College London, the Society for Nautical Research and the Maritime Information Association. http://www.maritimehistory.org.uk/kings-seminars.htm
Posted by Dr Jo Stanley, FRHistS. at 11:38