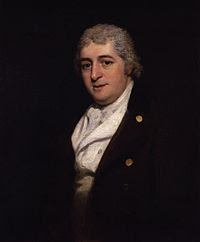 Left: Songwriter Charles Dibdin:set off for the East Indies but turned back at Torbay

Such songs led potential sailors to understand that not only would they be doing something fine for Britain/England. They would also gain personal wealth, social mobility, renown and jolly camaraderie if they joined up.

Lyrics valorised hegemonic masculinity (though Davey didn’t used that term) and mocked any cowards who would disregard the call.

In the long eighteenth century the songs were mainly produced as broadsheets by commercial companies – you could say the navy was outsourcing part of its public relations. The musical propaganda was concocted not by Admiralty wordsmiths but by a range of freelance writers. Charles Dibdin, the most famous of them, briefly enjoyed Pitt’s government fee of £200 a year for his work in 1803, at a time when Able Seamen got a shilling a day (less than £18 p.a.).

James Davey’s thorough and elegantly-organised presentation made clear these were honeyed lyrics, imbricated in imperial needs and myths.

But the labouring classes have always been good at ripostes that expose manipulation for what it is. By definition any such conformist represention of the Navy must have been countered by radicals who protested‘Hang on a minute, mate’ or ‘Who do you think you’re fooling, Admiral Anson?’ Davey explained that in this case it was cartoons, not songs, that showed the other half of the story: the horrors of the press gang and the difficulties of life at sea.

WOMEN
Of course I was interested in how women were represented in such songs. Three categories seem identifiable.
1. Potential wife. She'd say yes to a marriage proposal if Jack could bring in the promised financial rewards. Implicitly this posits women as motivated by greed and akin to prostitutes. It also suggests that the Jack-to-be is insecure about his desirability and thinks he has to top himself up with this inducement for consumers.
2. Soppy liabilities. They are wives and mothers who hold real men back from becoming naval stars. Would-be Jacks need to step up and shrug off such wimpy emotional ties, assert the lyrics. In this classic version of hegemonic femininity, women’s lives are implicitly represented as the binary opposites of career success, action and mobility, which actually takes no account of real women’s many strengths in supporting men and households.
3. Self-sacrificing patriot. A sweetheart in one song tells her man to go, because the country needs him even more than she does…. Well, it’s a good line, ladies, if you’re looking for excuses to get rid of a man.

In being flippant I’m making the point that these songs are simple, one-dimensional, and not realistic about naval careers nor human relations. But the con worked – Dibdin was worth 10,000 recruits, a sizeable percentage of the 40,000 men who were needed then.

WOMEN IN SHANTIES
The songs feel like they belong to a different world to the shanties that evolved in the merchant service a century later. Shanties were not designed to recruit personnel for defence work, but to harness workers’ labours as they shared physical tasks that benefited from concerted breathing.

Women in these shanties, as I argued in a recent paper, were sung about in the following, usually autobiographical, ways:
• She’s run away, cross-dressed, as a cabin boy (sometimes to find her sailor boy who’s gone before). E.g. The handsome cabin boy
• The sweet lassie who’s waiting for (undeserving) me. She’s my honourable muse/true love back home. E.g. Walkalong, my Rosie; Rolling King.
• Tarts who fleece and betray us poor innocent lads just back home from the raging seas with our big pay packets. E.g. Maggie May; Heave away boys, heave away; A-rovin.

The songs varied with the direction of travel. Outward bound shanties revelled in the thought that a range of wild (sometimes black or yeller ) gals are waiting somewhere exotic, with rum, to give us roving he-men a good time. E.g.The Gals o’ Chile; The plains of Mexico; Rio Grande; Johnny come down to Hilo; and Mobile Bay. Homeward bound songs about leaving those wild girls (alack but whoopee) include Spanish Ladies.

Such shanties therefore ignored:
• Women going to sea in their own right, with a sense of vocation
• Women who might not be interested in men, actually
• Women who were competent at ‘masculine’ tasks
• The more usual view of women as low whores and objects in a quick cash transaction
• Men who preferred to have relationships with other men and form a shipboard culture where women are not needed

If there is anything that an uneven comparison between the 18C recruiting songs and 19C shanties can tell us, it is that there was an enduring, but differentiated, binary. It linked men with sea and action, in contrast to women’s connection with land, non-public life and passivity. Songs didn’t just reflect an existing binary. Their attractive memorable rhythms continued to reproduce it, and thereby reinforce gendered norms.

This worked to the benefit of society’s dominant groups, and seemingly arrested women’s motility and mobility. So I value the modern feminist ripostes – like the shantywoman who sings of circumnavigating Cape Horn on a microwave.

Maybe the call is 'Woman that satnav!' 'All Marigold-gloved hands to the pump!' 'Stand by the pink fluffy MP3 players!'

Where are we bound? To that free country some of us have espy'd: Beyond Hegemonic Masculinity and Hegemonic Femininity, just a short trip away across the Sea of Outworn Habit.
Posted by Dr Jo Stanley, FRHistS. at 16:21