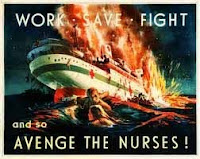 Pic: Outcry about nurses lost on the Anglia.

Today on Remembrance Day I'd like to remember particularly the women who died at sea in WW1 and WW2. Most people don't know that there were such women, but I've found there were a number.

Of course they deserve to be commemorated. To put a face to a phenomenon let us remember Violet Long, drowned at sea on Saturday 3 August 1918. A Chief Controller of Queen Mary’s Army Ambulance Corps, she was 32 and had two young daughters.Her long bright brown hair was later described by her vicar as ‘magnificent’.

On her way back from Le Havre to Southampton to give a progress report, her ship, the HMAT (His Majesty’s Australian Transport) Warilda was hit by a torpedo. They were 37 miles south east of Selsey Bill, nearly home.

Charlotte Trowell, her orderly, was coming home on special leave to marry a man who had just returned from Mesopotamia. She told journalists:

‘There was no warning of impending disaster when I retired to my bunk at a quarter to twelve. Mrs Long came to my bunk just before retiring herself and inquired, “Are you comfy?” and gave me some chocolates.

'When the torpedo struck the vessel I was thrown out of my bunk. I hurried on deck, and just as I got up there the stairway was blown up… I was put into a boat filled with wounded, but as the vessel sank our boat was not level. A davit rope was cut, but the boat capsized and we were thrown into the water.

'I clung to a rope and a wounded American Officer and an Australian pulled me into another boat. The wounded soldiers who were in that boat insisted on wrapping their saturated blankets around me.'

While Miss Trowell was sitting in lifeboat number four with her feet in the water ‘someone said “that is a woman” and I saw Mrs Long clinging to our boat and heard her murmur “Oh save me. My feet are fastened. I have lost a foot."’

Violet Long had become entangled in some rope. ‘I caught hold of her hair to hold her up and she said “You are hurting me.”’ Despite all efforts to free Mrs Long’s limbs and get her into the lifeboat, Miss Trowel says, Mrs Long's

'grip suddenly loosened and she collapsed and fell back into the sea. I felt like collapsing also at the sight, for she had been very kind to me, but I took courage from the fortitude of the suffering and dying men around me. Strange though it may seem, the thought that was uppermost in my mind was that I should have liked those who strike in wartime to be there to witness the scene.’

They were about two hours in the boat before a patrol boat picked them up. ‘An officer called out “The badly wounded cases first,” but the wounded replied “there is a girl in the boat. Go on, Miss” and that despite the sufferings they had endured,’ Charlotte Trowell marvelled

With hindsight the attack is understandable. The ship was a legitimate target. It was armed and it was what the Admiralty termed as ship an ‘ambulance transport’, rather than a ‘hospital ship’. This meant it was permitted to carry ‘Government stores’ which of course could include war materials. But as this ship was homeward-bound, rather than outward bound, it would have unlikely to carry armaments.

It took two hours to sink, which meant many could be helped into lifeboats. 123 people out of the 801 on board died.

There’s confusion about who was aboard and what happened. The hurry to be gallant did not necessarily help the women, who tried to keep calm and do their job but found it hard to withstand men’s pressure to evacuate sooner than they wanted to.

Interestingly, British newspapers did not use the Associated Press report carried by the New York Times that said ‘Women were placed in the first boats lowered, notwithstanding their protest that they should not precede the patients.

The London Times headlined celebrated Mrs Long as ‘Last woman to leave the Warilda.’ However, as there were only seven women, and they were all herded into same boat, this matter of minutes seems hardly to be significant timing. Steward TE Redman said she was on the first boat with him.

In the media Mrs Long’s loss was treated as a key part of the tragedy of a precious hospital ship being unfairly sunk, in ‘one more [of] the most dastardly crimes committed by a dishonoured enemy.’The image above indicates the tenor of the media outcry.

But it did not bring calls to stop women sailing. They had become too crucial to the war effort for such exceptionalising to be possible