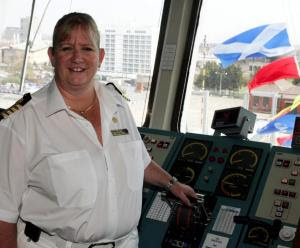 Cruise shipping developed in the late 19th century with Hamburg-Amerika Lines winter trips to southern parts. Over the century since, thousands of cruise ships were captained by men. But in the few years (see early entries on this blog) women are finally getting those roles - that recognition of their competence.

Today P&O cruises have announced the appointment of Australasia’s first female cruise ship captain, Sarah Breton, who will be on the Pacific Pearl.

Captain Sarah Breton, 46, boards Pacific Pearl in Auckland today for a 32-night South Pacific cruise. Beginning with a handover from Captain Andy Willard, she officially takes the helm of the ship on 12 July.

Capt Breton’s arrival means the crew on this cruise includes the biggest group of female senior officers on any cruise ship in this region, a sign of changing times for women in shipping.

"It’s taken a long time but we’re really proud that P&O is again leading the way by bringing the first female captain to this region,” Ms Sherry said.

“We are delighted to have Sarah as captain of Pacific Pearl and to see her joining such a large contingent of female officers on this cruise.

“She is an outstanding officer and one of only three female captains on major cruise ships anywhere in the world.”

Capt Breton said many women set out on shipping careers but the long periods at sea also led to a high rate of attrition as they grew older and wanted to spend more time with family onshore.

"It takes time to build up the necessary experience so rising to this position takes many years – there are no shortcuts,” she said.

“The responsibility as captain is huge, but it’s the same responsibility whether you are a man or a woman and the reaction to my captain’s appointment last year has been terrific.”

“Growing up near the water I always loved boats and the ocean, so it really does fulfill a lifelong ambition of mine to be a captain with P&O Cruises,” she said.

Capt Breton has been sailing with her family since she was born and her earliest memory of a P&O ship was on a school cruise, at the age of 11, visiting Bergen, Oslo and Copenhagen on the Uganda.

Captain Breton lives on the Essex Coast and when on leave spends her time with family, in her garden, sailing - whenever the weather permits - and watching Six Nations rugby and Formula One motor racing."

Hi, I'm 23 female and live in the U.SA . I'm really interested in taking this career and possibly one day become a captain myself, I would like to know how many women are employed in this field,and the challenges of becoming a captain one day and officer :)

Your best step for info is this professional organisation: www.womensmaritimeassoc.com/intropage.html