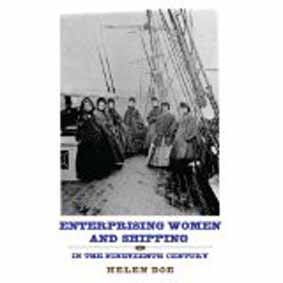 In her 2009 book she also shows that women were chandlers, blackmsiths, teachers of navigation, ropemakers and even naval shipbuilders. Her book is Enterprising Women and Shipping in the Nineteenth Century, Boydell and Brewer, Woodbridge, ISBN 978-1843834724, pp.2896, price £55.

Helen Doe has certainly broken new ground in writing about such women. Her findings deserves to be more widely known because they - yet again - refute the stereotype that in maritime life only a neglible number of women had power, and that it was neglible power at that. She has made a very important contribution to maritime history and women's history.

Archival research is usually described as 'painstaking'. In this case I certainly know it was.

Hopefully researchers in other countries will follow Helen's example, so that useful comparisons can be made. Australia, the West Indies, and Canada seem ideal places to look.

It would be especially valuable if those researchers examined the operations of (class and) gender within the industry. What enabled particular women to take on such non-traditional roles? How did they manage their 'femininity'? Were their ships run differently? What was the long-term impact on gendered attitudes in those coastal towns, for example, did it increase respect for women?
Posted by Dr Jo Stanley, FRHistS. at 18:25