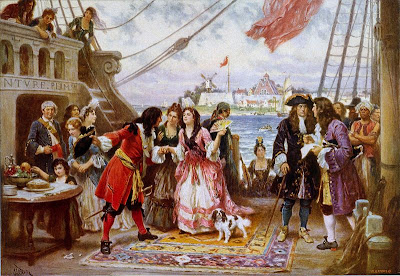 I'll be talking about women pirates at a Pirates study day, at the Museum of London, Docklands. It's on Saturday 24 Sept 2011 from 10.30am–5pm. The title is Delve deeper into Pirates: The Captain Kidd Story.

No, Captain Kidd, wasn't secretly a woman, but gender is on the agenda.Come and find out whether pirate life was anything like this picture:Captain Kidd in New York Harbor.

It's by Leon Gerome Ferris (1863–1930)from the series The Pageant of a Nation. This is a a postcard published by The Foundation Press in 1932 and portrays a very fanciful amount of fancy women, for a working pirate vessel.But at least it makes the realistic point that many male seafarers seek female company when they dock.

My session is Women pirates: heroines and hell vixens, or victims and boss's wives?

I'll be arguing that female buccaneers such as Anne Bonney have become modern icons of girl power, not least thanks to Geena Davis in Cutthroat Island. But were they actually admirable heroines?

This talk proposes that we think more deeply about women seafarers’ place in shipboard society. Could they be re-seen as, like lads, targets of cruelty? Could some have been simply widows who had to keep the family business going?

Leading academics will be discussing the history and cultural resonance of pirates and piracy. They include David Cordingly, Hilary Davidson,Ed Fox,Angus Konstam and Tom Wareham.