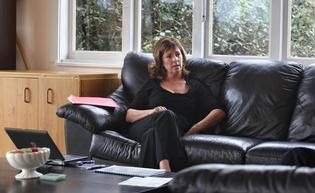 Today's a bumper day for news about women who exceptionally make it in the maritime world. Maree Turner has just won the inaugural Aspiring Director award from the Institute of Directors' Bay of Plenty branch in New Zealand.

The story of her career path and the gendered struggles is really telling. In the Bay of Plenty Times, Graham Skellern writes this:
"Award winner Maree Turner has always believed people should be chosen on ability, not gender - and that you shouldn't pre-judge them.
"Over the past 30 years Maree Turner has had an interesting and varied career in the maritime industry, earning her oceangoing Master's Ticket, managing stevedoring gangs, organising cargo movements, and even helping to plan new container terminals.
She has held her own in the man's world. Now, she is taking the next big step in her career - gaining the experience to become a full-time company director...
"This is a huge opportunity to get more experience," said Mrs Turner, who is now a consultant with NZL Group, based at Mount Maunganui. "There is now a willingness to give younger senior managers development opportunities.
I've gone into port company, shipping and union meetings and been the only woman there," she said.
"I guess I've got tenacity and leadership skills. And I've always believed that people should be chosen on ability, not gender - and that you shouldn't pre-judge them," said Mrs Turner.
She held that belief when she left Carmel College in Auckland and headed for the Union Steam Ship Company.

"I didn't realise there weren't any women there. Here I was, from an all-girls school and the only girl on the ship."
She was actually the third female sea cadet in the country but the only one in her intake of 35 in 1982. Another cadet that year was Tauranga-born Peter Jackson, who became her husband and is a ship's pilot at Port of Tauranga after also earning his Master Mariner certificate.
Turner began as a Third Mate on the cargo ships Rotoiti, Marama, Ngahere and tanker Amokura during two tough years at sea.
"We cleaned the bilges, changed the crane wires, went down the crank case, and over the side of the ship to paint. Cleaning out the chain locker was a dirty, dangerous job, and we also went on the bridge to do some navigation and sights. You knew all about the ship, and the jobs, from top to bottom."
Turner progressed to Second Mate, then Chief Officer and finally gained her Master's Ticket after having six years at sea and study periods at the New Zealand Maritime School.
She worked on the Sea Link Cook Strait ferry, the gas tanker Tarahiko, and Forum Line that delivered general cargo around the Pacific Islands.
Then she was selected for P&O's main fleet and joined the Fishguard Bay container vessel on the Eastern Asian run between Singapore, Taiwan, Korea, Japan and Jakarta.
"The ship had a Chinese crew and British officers, and I was the only New Zealander and woman. It worked out fine and I certainly learned how to manage people," said Turner.
She came ashore in 1992 and moved to Tauranga to become cargo superintendent with Tasman Asia Shipping (now Quadrant Pacific), planning the loading of ships....
She is now consulting. Her present project is helping to prepare the legal case for NZL - supported by Ports of Auckland - to reinstate its container terminal operation at Sulphur Point.
Turner, who has a post-graduate diploma in management studies from Waikato University, was director on the Conlinxx board, a joint venture between Ports of Auckland and NZL that established and operates the inland port at Wiri.
She is also a member of the Chartered Institute of Logistics and Transport and is running for national vice-president this year."
Posted by Dr Jo Stanley, FRHistS. at 00:50