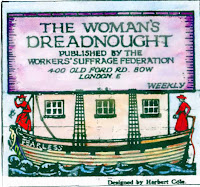 This year's Sylvia Pankhurst Memorial Lecture is by me, and called Suffrage campaigners on the ocean wave

The lecture takes place at Wortley Hall, Sheffield, on Friday August 12 at 7pm.This is what I'll be saying in my very illustrated talk:

Fighting for women’s rights brought an inadvertent side-effect: it encouraged thousands of suffragists and suffragettes to seize the freedom of the seas, roads, and railway lines.

Women who had never before left their home town went campaigning and networking across the Atlantic and Pacific. They ventured thousands of miles, alone or with sisters from movement, to give attend key conferences, make lecture tours and investigate conditions. It was a revolution in international connecting as profound as the internet revolution of our times.

Sylvia Pankhurst was one of the many women to seize her rights to mobility by sailing on ships, be it cross-channel steamer to Paris, little ferries from Dublin, or deep sea liners.

In WW1 a tiny number of suffragettes such as her mother Emmeline and sister Christabel sailed with impunity for reactionary ends, whereas suffragists were effectively banned from the seas.

However Sylvia was a key fighter against the ban on peace campaigners’ rights to attend the 1915 Hague International Conference of Women for a Permanent Peace; it could have ended the war. More than any other organisation, her ELF supported sailors’ (and soldiers’) wives.

This lecture tells the stories of both gallant sailings and frustrations at quaysides. It celebrates the geographical mobility that accompanied women’s new freedoms as they pressed impressively forward to build justice worldwide.