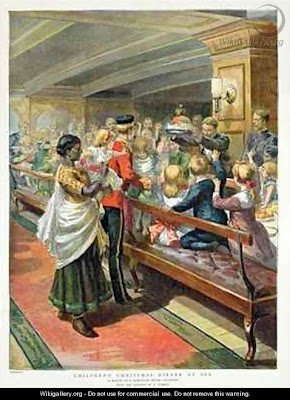 Ayah at children's party on ship, 1889. Painting by Godefroy Durand

Christmas on ship for women crew and women passengers in the past has varied depending upon the period and the vessel.
In the early and mid-twentieth century routinely stewardesses on liners and cruise ships decorated the public rooms with paper chains, lanterns and baubles. Sometimes the women passengers helped dress the tree with fairies and tinsel as they might at home. Male passengers didn’t; it seems to have been a feminine rite.

MARY &THE KING'S BROADCAST, WW2
In wartime women and men in the armed forces sometimes were en route to overseas postings during the Yule period. When Territorial Army nurse (TANS) Mary Wrangham Hardy was sailing from the Middle East to Italy on the Melita, just before Christmas 1943:
‘It gave us a strange feeling …. On Christmas Eve everybody collected on one of the decks for carols. Next day we all sat on the steps and the floor to get as near as possible [to the wireless] for the King’s Christmas Broadcast. The reception was perfect – we could hear every word and felt that it was a link with our families at home. ‘

YVONNE IN PARADISE
For other women the principal feeling was not nationalistic nostalgia but wonder at the difference between their usual Christmas in Britain and the possible other versions of it in other countries. Women’s Auxiliary Air Force member Yvonne George loved docking in the Bay of Algiers on Christmas Day 1943.
‘When we saw the view confronting us we all thought we had been transported to Paradise. There before us under bright blue skies with the sun beating down stretched among leafy green trees in the hills where white villas, some looked like palaces all nestling among orange and lemon trees in full blossom with the sweet perfume … permeating the air. Coming direct from the dark gloom of blackened-out England … it seemed to us that we had suddenly fallen on a different planet.’

SENDING A CHRISTMAS MESSAGE
All seafarers are acutely aware that they can’t be with the people they care about back home. Today this can be remedied to some extent by Skype and mobile calls if they can get a signal. (You can’t in always in mid-ocean spaces).
People also phone via satellite communications, such as SAT-M and V-Sat, on bigger ships. Satcomm companies offer cheap rates for festive periods including Eid and Diwali (Quiet Time, Super Quiet Time) because business traffic is less on those days. The more generous shipping companies allow free phone calls and internet access. 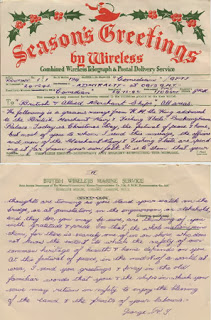 In the past, cards and presents would have been snailmailed many weeks earlier – and wouldn’t necessarily have arrived at the right port on the right day. As on land, women tended to be the ones who organised sending cards; they were not likely to be the recipients to the same extent that men were. Today’s e-cards arrive more reliably -- if you’re within signal range.

FUN,NOT LONELINESS, ON PASSENGER SHIPS
Seafarers, especially young ones, often say that they expected their first Xmas at sea would be lonely and that they’d miss home. But then they actually have a wonderful time. This is not least because operators of cruise ships catering for the West European market put on so many festivities. (Profit-focused, they want passengers to have such a good experience that they come back, ideally with extra paying guests).
And staff are part of that fun, as well as helping organise it as cruise directors, social hostesses, shop assistants etc. Behind the scenes, Christmas is yet another excuse for a boozy staff party in someone’s cabin, although modern prohibitions on crew alcohol consumption mean no one is as legless as they were in fifty years ago. 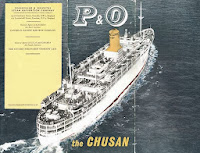 On the Chusan in the Red Sea in 1955. a woman passenger wrote :
“25 December - went to breakfast and found that a menu and Christmas card was placed for each person. Church service was at 10.30…after lunch walk around the dining room to see the Christmas spread, the amount of work the chef had done, there was a boar’s head, two sucking pigs, a large ham, turkey, Christmas cake, a cake made into a clock and decorations were wonderfully done. After that went up in the lift and there was a piece of mistletoe right in the centre and one of the ship’s officers was standing right under it, when it was pointed out he was in a dangerous spot he quickly moved to the side. Then we heard the Queens speech, we are two hours ahead of English time…
And so to dinner. I wore my spotted cocktail dress and it was very comfortable. We had a super time, three bottles of bubbly, the Chief Radio Officer footing the bill and we wore our hats and were kicking up an awful din blowing whistles and playing the fool generally”.
http://www.poheritage.com/the-collection/galleries/Seasonal-Selections/Christmas-at-Sea.

As in hotels, work doesn’t stop for Bank Holidays. Most seafarers work a seven-day week, every day of a trip. So Xmas means being on duty as on every other day. It’s just that you might wear a pair of fake antlers and a Santa hat in Caribbean sun as the tannoy belts out songs about sleigh bells and you scatter fake snow by the pool.
The carnivalesque tradition of the upper ranks getting waited upon by the lower ranks in a Christmas meal was once a common occurrence.
Secular folks haven’t a snowflake in hell’s chance of avoiding traditions like carols and Christ’s manger if they’re on a British-operated passenger ships. But being in a floating hotel is a very good way to avoid having to cook a turkey and pud for a large family.

NOBODY ABOARD KNOWS WHAT XMAS IS
On tankers and cargo ships chefs used to pull out all the stops to create a festive day. Shipmates made up for the absence of relatives by being each other’s family.
Today almost all non-passenger ships have crews who may not speak English or celebrate Christian and European festivals. So a British person on board can feel lonely. Some ships are dry, too. So the difference to Christmas on land is very marked.