The lost history of Wrens and QARNNS on battleships in WW2: news of event in Jan 2014 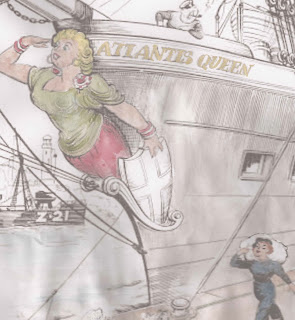 A uniformed service woman on a wartime battleship? Surely it's a seeming contradiction that can't be countenanced, like, for example, Prince William marrying a North Korean barber.

But ... it happened. Royal Navy vessels in WW2 exceptionally carried women as semi-members of the crew. They were either Wrens being evacuated or going out to overseas postings, or naval nurses(QARNNS assisting homeward-bound British Prisoners of Wars as the conflict ended.

WELCOME TO A TALK
On Wednesday January 8 I'm giving a highly illustrated talk on the subject at the National Museum of the Royal Navy in Portsmouth. "Grog, darning and gendered un/welcomes; Wrens and QARNNS nurses on WW2 warships" takes place at 5o'clock and is free. (http://www.nmrn.org.uk/sites/default/files/Research%20Programme%20leaflet%202013-2014.pdf)

In it I'll be looking at the way these women were seen as intruders and anomalies that had to be accommodated into closed and traditional masculine institutions. They were "matter out of place", to use an anthropological concept.

WRENS
Great tension caused by some Wrens who were seen as transgressing gendered boundaries by expecting that if they worked as men did they should also get men’s rewards, including grog. Wrens on warships were positioned as boys (at best) or troublemakers and spoilers to be got rid of (at worst.
But on some more progressive ships officers were proud to flaunt Wrens on deck as they sailed in a celebratory way into the world’s harbours.

QUARNNS
The only accounts of QARNNS on ships show that they were welcomed, and even made honorary members of ship’s companies, because they were not challenging. They sewed for the men and did not expect to be treated as full participants.
In other words, they behaved as lady visitors traditionally did: appreciatively and supportively. The outcome was sometimes marriage.

SO WHAT DOES IT SAY ABOUT GENDERED ATTITUDES?
With what degrees of welcome and dismay were women, as matter out of place and feminised representatives of civilian and domestic life, handled by their hosts?
What place could women negotiate in total institutions geared to war, the support of the status quo, and the avoidance of ‘weak’ emotions?
And what do these cases reveal about women’s and men’s attitudes towards something approximating gender equality?
--
Using concepts such as ‘matter out of place’ (Douglas) and ‘hosts and guests’ in ‘total institutions’ (Goffman) this accessible but scholarly talk explores three recorded cases as examples of possible underlying trends in attitudes towards gender on British warships in WW2.
Why do it? Because during my research into women at sea in both world wars, for a book to be published by Yale University Press next year, I stumbled over these women and found their experience fascinating and telling.
I want to share it with you and anyone who's interested.
Hopefully it will be helpful in understanding naval men's attitudes towards women fifty years later when females were allowed to serve on some warships, as Smiles' cartoon shows (May 2000, Navy News).
The caption reads "The last [HMS] Dauntless had an all-female crew - why not the next?" So far, of course, there has been no all-female warship, although there were many all-male ones.